Our goal at PWF is to give you an optimized Tinder framework so you can get as many girls as possible. We have hundreds of members on our forums and Mastermind, so we get to see a lot of guys’ text game in action. Plus, we ran the “Hot girl vs average girl experiment,” which allowed us to see even more guys’ (unforgettably shitty) text game. From that, we’ve observed a handful of mistakes that guys (especially newbies) consistently make.

We want you to get laid as easily as possible, so I’m going to highlight those big mistakes in this article. And I’ll go through them one by one, so you can learn from each and avoid them.

A lot of guys text/invest way too much in the first text itself. Keep it short and simple. If you don’t, it communicates that you don’t generally match with girls of her caliber. Even worse, “pickup lines” just blatantly tell the girl that you send the exact same text to all the girls. 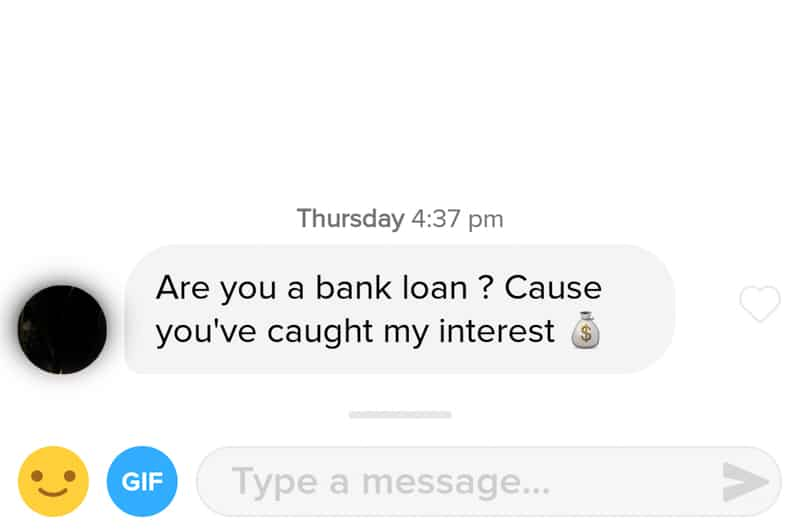 Kinda whimsical but it will not get you a reply. Even if it does, you’re going to have to do a lot of heavy lifting after. 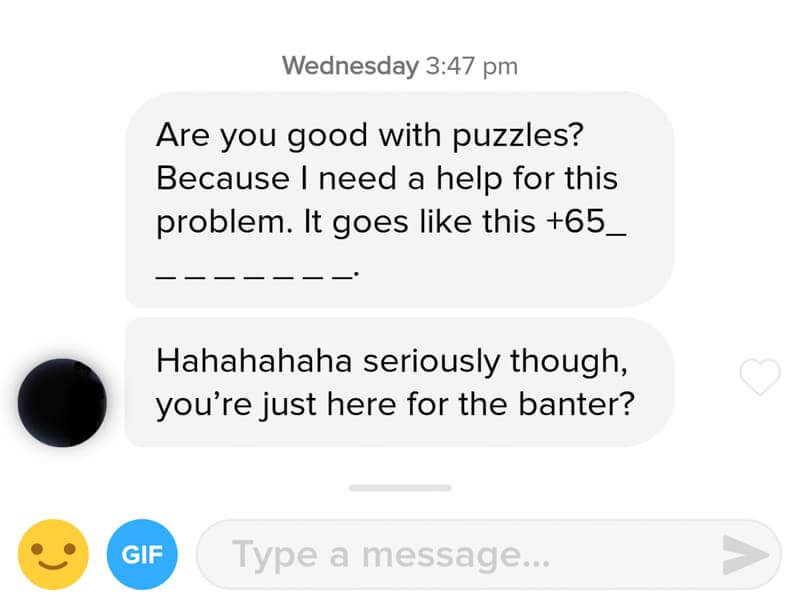 It’s not really wise to ask a girl for her phone number as the opener. Tells the girl that you’re so easily won over even without her uttering a word to you. Shows lack of standards and she won’t be engaged.

Not sure what to send her? Fortunately, we’ve done the work for you! Here are some of the top Tinder openers that we researched.

Online Dating Mistake 2: Putting The Girl On A Pedestal

Women love a bit of a challenge. They don’t want it easily given to them. So, if you show a lot of interest or over compliment them when they haven’t earned it, you’re losing attraction points by not being a challenge in her eyes. 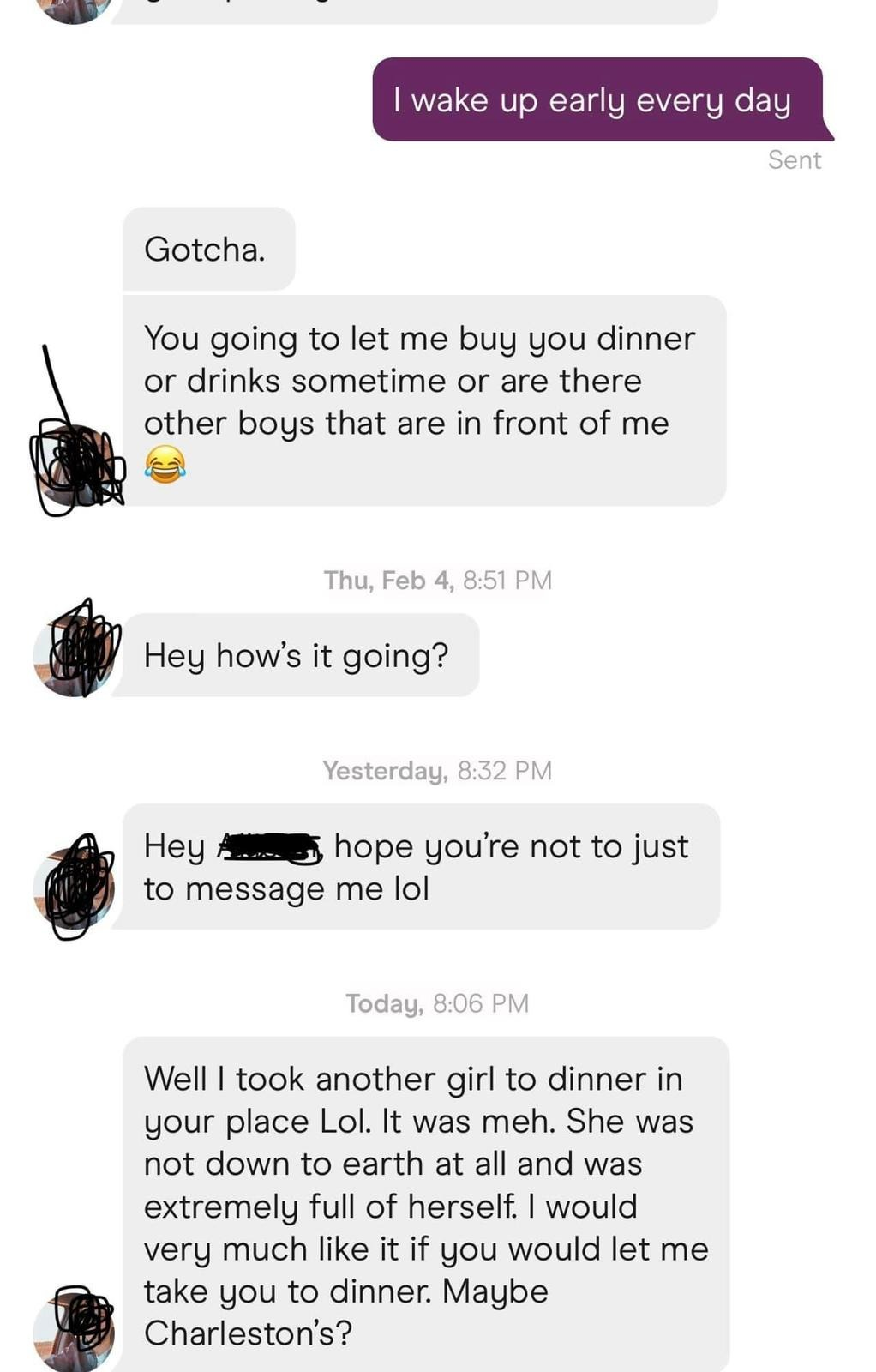 (Guy is on the left in this case) “You’re going to let me buy you dinner or are there other boys in front of me”. A high value male assumes he’s the best option she’s got and he has no competition. By sending texts like this, she gets instantly turned off. Even worse, it’s followed by double texting (and then triple texting) as a way of rewarding non-compliance by re-closing her to try to set up a date. He even gives a location and puts the choice in her hands (Wrong! Wrong! Wrong!).

Guys who use dating apps are under the impression that by just matching, a girl is interested and you can start moving towards the direction of the meet. Remember, a girl matches with a lot of guys. Skipping the step of Vibing / Flirting over text and building investment means you don’t stand out from all of those guys.

If you try to go for the meet too early without soft closing first as a reward for her investment, you’re placing yourself in a “NO ladder” and it’s easier for her to say NO the next time you ask to meet up as well.

He did a very poor job of soft closing here. When she said “Nothing that I know of…”, he should have gone with “We should change that”. By assuming she said YES to a soft close and actually asking her what time would work, he lost her at that point. Then he double texted her with “I know a good restaurant to order uber eats from. Are you cool with that?”. No wonder she ghosted him.

Tinder Mistake 4: Being Too Platonic / Friendly

Guys take the pussy route more often than not out of fear of the “risk of losing the girl”. But, what they don’t realize is that women lose respect when a guy is not direct and beats around the bush.

When she said “I’ve always wanted to be in medical sales”, he qualifies himself in a very nice way to show what he does for work. I would have gone with “I can imagine you dressing all cute and doing door to door pharma sales ;)”.

Being butthurt/bitter is maybe the biggest turn off for women. I’ve seen way too many men getting mad (in a girl’s phone) if the girl doesn’t reply, says she’s busy to meet up, or flakes on a date. 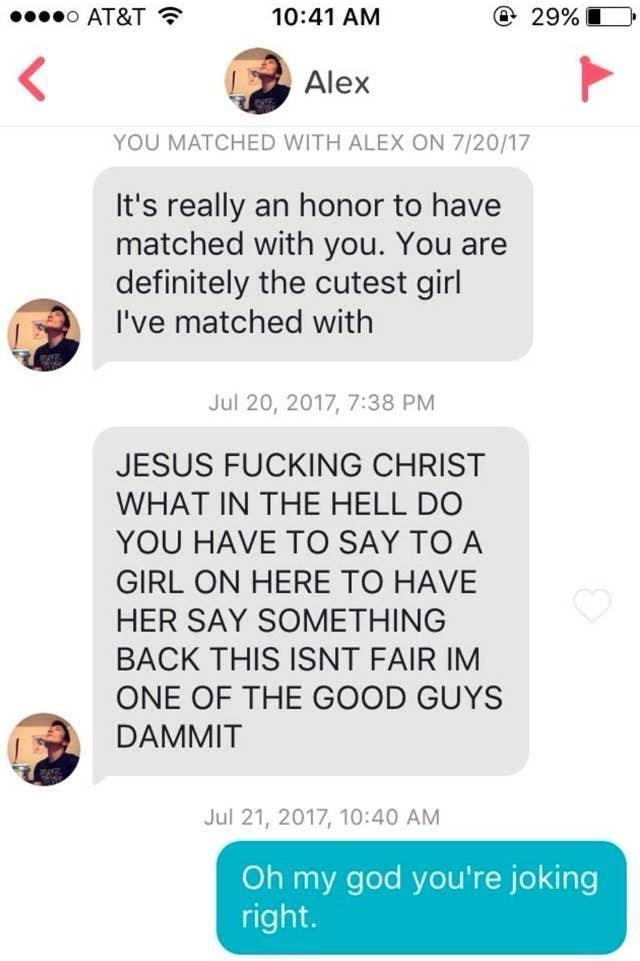 An overtly nice opener which puts her on a pedestal instantly. Refer back to Mistake 1 so you guys never do this. He double texts the same day. Probably even within a few hours with an extremely butthurt message. He communicates instantly that he can’t get any girl ever and he’s frustrated. He calls himself “One of the good guys”. Definitely not the case!

Dating App Mistake 6: Attempting to Neg and/or Insult Her

Negging is an old school PUA technique which is often counterproductive in this day and age. While it can be good to get a girl riled up, most of the time doing it over text results in you just come across as a weirdo or an asshole. And as a result turning her off. 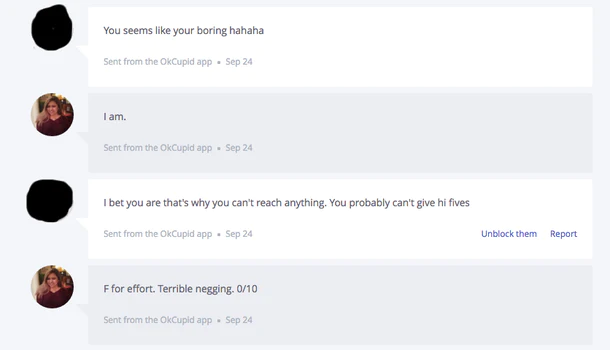 Extremely terrible opener with “You seem like your boring”. (Can’t even distinguish between “your” and “You’re”!) So, why would he match with her? A girl can smell this kind of BS from a mile away and by now, almost all are aware of these PUA techniques. She brushes it off with “I am”. Followed by another neg which she grades as an “F”. Rightly so.

Tinder Mistake 7: Calling Her Out of the Blue

This is actually something a lot of people are unaware about. You should almost absolutely NEVER call a girl you haven’t met out of the blue. In fact, you should minimize your interaction over the phone before you meet her and have actually closed. Why? Because some women get quite awkward about talking to someone they’ve never met. Moreover, if you call her out of the blue and she doesn’t pick up, she feels even more awkward to return the call since she may have seen your call and ignored it on purpose.

There are only two cases in which you should try calling a girl up:
1. When she admits she’s a “bad texter” (at that point, you have nothing to lose anyway), or

Level Up Your Text Game by Avoiding These Mistakes

If your goal is to move from Tinder to a date as efficiently as possible, it’s critical you avoid these common Tinder messaging mistakes. In fact, by learning to avoid these seven mistakes, you are instantly a step ahead of 80%+ of the guys online.

By the way – one of the best ways to learn to improve your text game is to look at some actual girls’ Tinder accounts. The next time you’re cuddling after sex, ask the girl to scroll through her Tinder matches with you. This is a literal goldmine for getting female feedback and learning what other guys are doing (well AND poorly).

Hit me up in the comments if you have any questions!