Ah! The dreaded flakes. Nobody likes when a girl flakes on you. Especially when you ran good text game, had a solid vibe, and qualified that she was up to your standards. Maybe she even promised to show up on the day of the date (and you made sure to set up a solid date).

You’re starting to get ready for the date. Getting your bottle of wine and some glasses handy. Picking out what you’re going to wear. Then she hits you with something like “Hey. I got called in for work. Can we please reschedule?” Or even worse, she just ghosts when you try to confirm on the day of.

First, it’s important to know that flakes are just a part of online dating. They happen to even the best of us.

3 Tips to Preventing a Girl From Flaking

To start off with, how would you prevent a flake? It’s important to note that no matter what you do, you can’t prevent all flakes. Girls have a life, and contrary to some other bad advice that’s out there, the majority of flakes are actually at least semi-legitimate. Truth be told, you’re just some random guy, and until she’s met you (and probably had sex with you), you’re not a high priority in her life.

That said, if you want to do everything you can to reduce the chances of a girl flaking, these are the 3 factors matter the most:

The way investment gets solidified is over time. If you text back and forth for only a short period of time one night and make plans after that, she may agree enthusiastically. But, this leaves a higher risk of her flaking, since she isn’t really thinking about you after you’ve hard-closed for the meet (I will explain more in detail how to avoid this later). 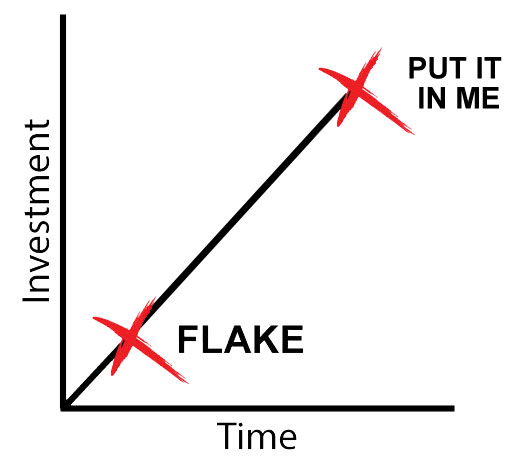 What to Do When She Flakes

Let’s assume that these 3 steps were followed to the T, and the girl still flakes on the day of. Again, no matter how good you are, this WILL happen. What should you do? These following mindsets and tactics have helped me drastically in dealing with flakes.

The fifth point above is key. A really high percentage of the time, if a girl flakes and you respond nonchalantly, she’ll reschedule with you – and then actually show up for the new date. But if you respond with any sort of indication you’re hurt or emotional about it, she’s not going to reschedule with you. With that in mind, let me break down a couple scenarios where the girl flaked, offered to reschedule, and then the meet happened.

B. Here’s an example of a call out:

To reiterate, it’s extremely important to not get bitter or butthurt and show any kind of negative emotion when a girl flakes. But, also at the same time, do not let her dick you around. If she flakes multiple times or ghosts on you, you can call out the behavior, but do so in a non-caring / non-emotional kind of way. So rather than saying “You dumb bitch, how dare you disrespect my time”, try, “I genuinely didn’t take you for the flakey type.” This still calls her out, but it also gives her the opportunity to explain herself, and leaves a chance for her to reschedule.

When girls don’t offer to reschedule, you can hit them with “If you’re too nervous, I’d understand”. This text shows empathy and gives the girl a chance to express her concerns, if any. If she was never invested/interested to meet in the first place, then you might have missed the key components of gaining investment before solidifying the plans to meet.