The following is a guest post by Aaron Johnson

In this post, I’m going to break down the basics of sexting a girl you like. Specifically, this article is for sexting girls who you are trying to seduce, and haven’t yet had sex with. Rather than giving you blanket dirty texts or good sexting material, I’m going to give you a framework. This framework lets you to sexualize Tinder (or other dating app) interactions, without creeping her out and scaring her off.

So let’s start by discussing the concept of compliance ladders. The idea with compliance ladders is that you build compliance over time, getting a girl to give a positive response to something small then building on with something bigger and sequentially bigger. In psychology, this is known as the “Foot in the Door” technique. In cold approach, a common example of compliance laddering is when you move a girl a few feet in a bar, using that to test for compliance to work toward a bigger move – like a change in venue or a pull back to your place. If she complies with your movement, you’ll then go for something that’s a step bigger. If not, you focus on seducing her more to build up more compliance.

One of the core fundamentals of what Alex teaches in Playing with Fire is that you need to screen for girls who are DTF by showing clear sexual intent. One of my biggest challenge on my journey of mastering text game has been figuring out how, exactly, to sexualize without putting women off or being creepy. A mistake I frequently used to make – and I often see newcomers make in the Playing with Fire Mastermind – is to sexualize aggressively and out of nowhere. Uncalibrated sexting comes across as creepy and is perhaps the #1 way to ruin a conversation.

Here’s a recent example from one of our members (who, to his credit, has already made a tangible improvements due to the detailed advice he’s been getting): 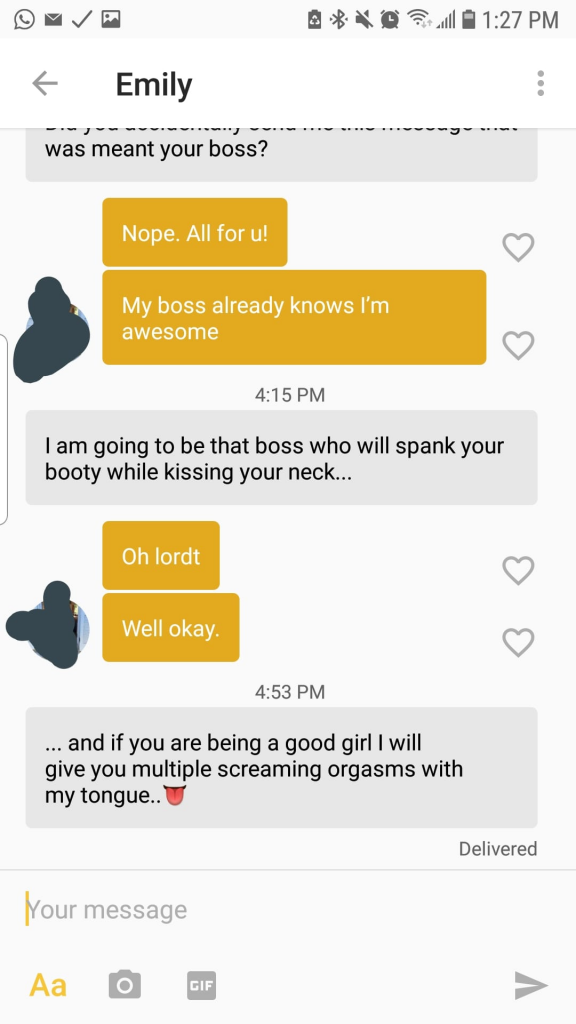 Do you see where he went wrong? Let me break it down for you:

What should he have done instead? Use compliance ladders to build up the sexualization and test her willingness to comply with being more sexual. In this case, a safer reply would have been something like, “I bet you look sexy in a pencil skirt and blouse”. Notice how it’s sexual, but it’s also a little lot more subtle, and thus less likely to creep her out.

From there, she may have responded positively, for example, “Yes, I’ve been told that I look great in a pencil skirt”. That would have been a green light to take a step up the compliance ladder, and be a bit more sexual to see how she responded. Or, she may have responded negatively, in which case he could have dialed it back and pivoted away with something like, “Haha. What do you do for fun btw?”.

So with compliance ladders, the key is to start small, to test for and gain compliance. Then, you need to read her reaction and adjust appropriately. If she responds positively, that’s your green light to go a little more sexual and keep pushing your way up the ladder. If she responds negatively, go in a different, non-sexual direction to build investment instead.

Here’s an example from a recent girl I had sex with that shows another example of testing for compliance:

In the first screenshot, you can see that we were in a bit of a platonic place. I start trying to move things forward by both being authentic as well as DHVing a bit, and she’s giving me IOIs back in the form of compliments. Based on her positive reaction, I now decide to start sexualizing, to see how she reacts. I intentionally give her a bit of an open loop, noting that cooking is “one of my two biggest passions” – I am fairly certain she’s going to want to know what my other passion is. She bites, and I test out her compliance, rather than just sending a highly overt sext right away:

From there, she agrees, and so it’s time for me to work toward soft closing. I bounce her to text message, where she’s still asking me questions, telling me she wants a little more comfort. So, I set up a quick comfort-building phone call the same night, and end the call by arranging for a wine date at my place a few days later.

Look through this interaction and think about how you should pivot if her responses were different. For example, how would you pivot in a non-sexual direction if she had given me a strong red light after “Second is a little more R-rated”? Share your questions and thoughts in the comments below!

Just as compliance ladders are a crucial element of cold approach, they are also essential to sexting on Tinder, dating apps, and text game in general. Most guys who are new to text game fall into one of two camps. They are either too afraid to sexualize, and thus set the wrong frame up front (this was me before I discovered Playing with Fire). Or, they are way too aggressive in sexualizing, and blow themselves out by being uncalibrated (this was me for a bit, right after I first picked up the Playing with Fire Online Dating Blueprint and started implementing sexualization). Learning how to use compliance ladders, and adjusting your messaging strategy for a woman based on the responses you get back, is a great way to quickly improve your sexting skills.