Hopefully by now you know, girls on Tinder are flooded with matches. So, having awesome Tinder pictures and a solid Tinder bio isn’t nearly enough. Your ability to properly message girls on Tinder is essential to getting results.

Today, I want to share with you some key rules/mindsets you need to keep in mind when you message a girl on Tinder (or Hinge, Bumble, or any other online dating). These 5 key rules and mindsets will help you stand out among her matches and keep her attention.

Most guys on Tinder go overly fancy and think they have to jump through hoops to impress the girl. So, they tend to put way too much time and energy into their Tinder opener. No matter how attractive you are, with an excessive Tinder pickup line, the girl gets turned off. Because when you put that much effort into your first text, the girl tends to think you don’t often match with girls of her caliber. 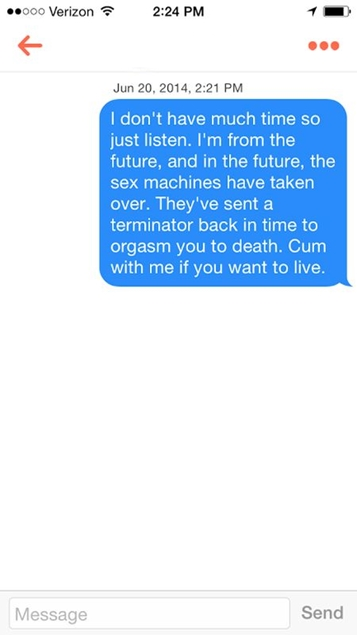 This is clearly a pickup line and the girl probably won’t respond, and might even unmatch. It’s obvious copy/paste and she’ll know you sent it to 50 other girls. More importantly, she knows she has already won you over, which makes her the “buyer” and you the “seller.” You want every interaction with women to be the opposite, where you are the “seller” and she is trying to impress you. 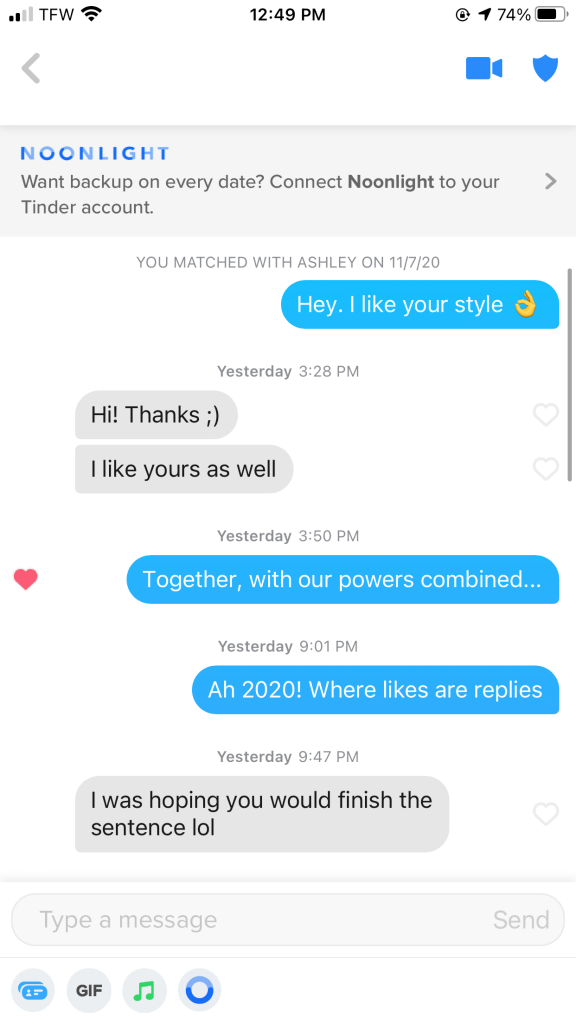 Notice the difference here. It’s a simple compliment which doesn’t really give her too much validation and doesn’t ask the girl to give back too much. She is going to feel like she needs to continue the conversation. This can be the basis of a good interaction. Basically, you want to have the mindset that just because she matched with you, doesn’t mean she’s already won you over. (More on that below.)

2. Be the Buyer, Not the Seller

As discussed in the previous point, you don’t want to make it seem like the girl has won you over from just matching with you and being attractive. Women crave at least a little bit of a challenge. Plus, coming across with the “buyer” mentality shows you have standards and have women in your life, which is attractive. One of the best ways to come across as the “buyer” is to ask qualifying questions that demonstrate you have standards beyond her looks.

Qualifying: Qualifying a woman is making her prove herself to you. By qualifying her, you demonstrate that your standards go beyond her simply being attractive.

Qualifying Question Examples: “Are you open minded?”, “Are you adventurous?” “What’s the craziest thing you’ve ever done?” “Favorite travel destination?” “Are you kinky?”

A bit more about the buyer/seller dynamic! If you ever look at even an average girl’s Tinder (I highly recommend doing this on your next date), she is flooded with matches from attractive guys. So, being a good looking guy isn’t enough. In her mind, because she’s flooded with guys, it puts her in the “buyer” dynamic, since she can weed out men based on their ability to talk or hold a conversation. If you can flip this dynamic to you being the “buyer” instead of the seller, the woman will assume you’re someone who gets a lot of matches (and women), and that this is your process of weeding out women based on qualities beyond looks.

He bragged about his work. Or rather, he tried to sell himself by talking in detail about what he does. He also sent a screenshot of his work. The context here is that she never asked him for it. So he’s obviously doing this to impress her. When you’re trying to impress her, she’s the buyer, and you’re the seller. Plus, this approach turns women off simply because it is so overtly braggadocious. Telling a girl about high value things you do is good, but it has to be done in a non-bragging way, and it has to be done from as the buyer, not the seller. 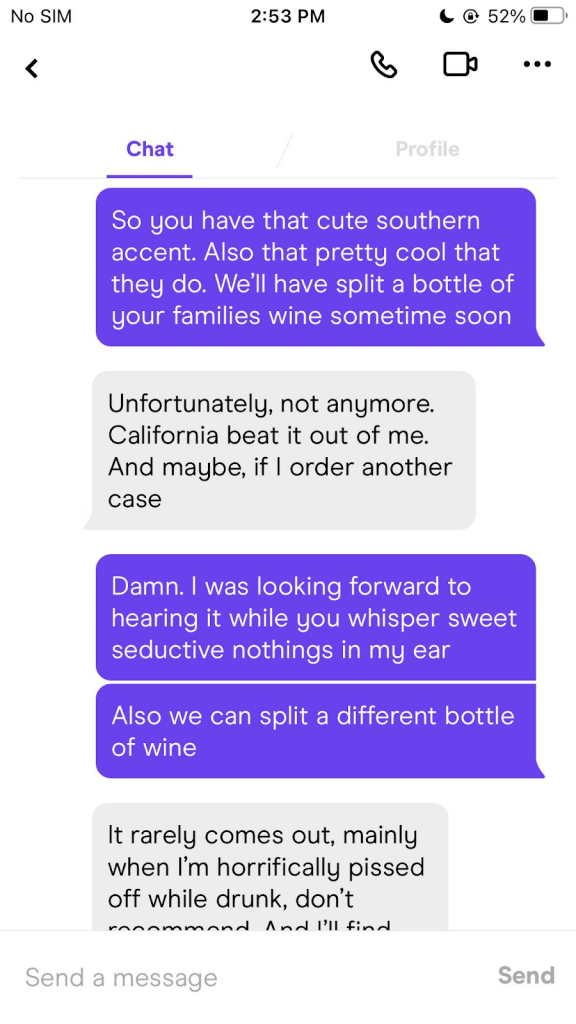 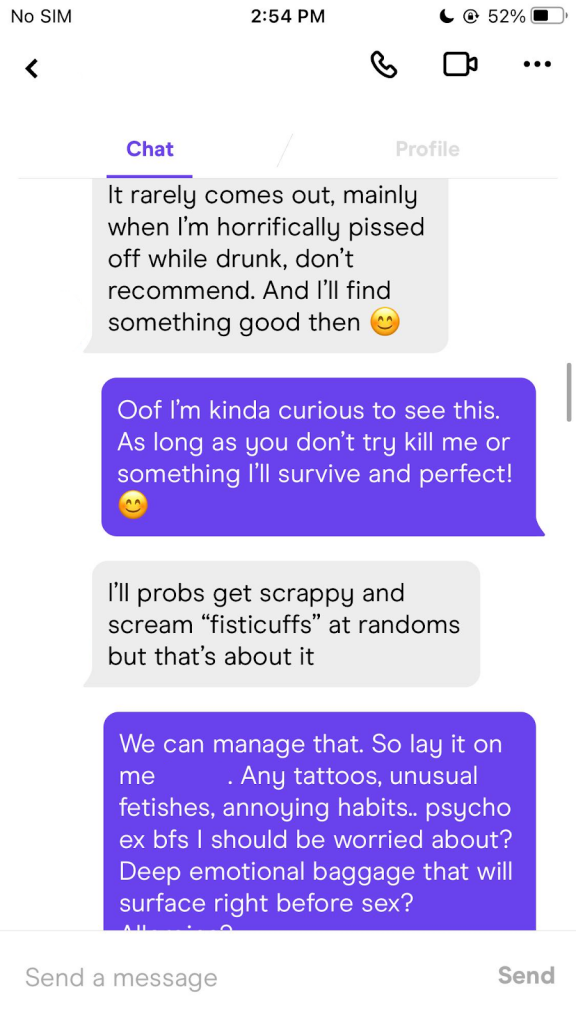 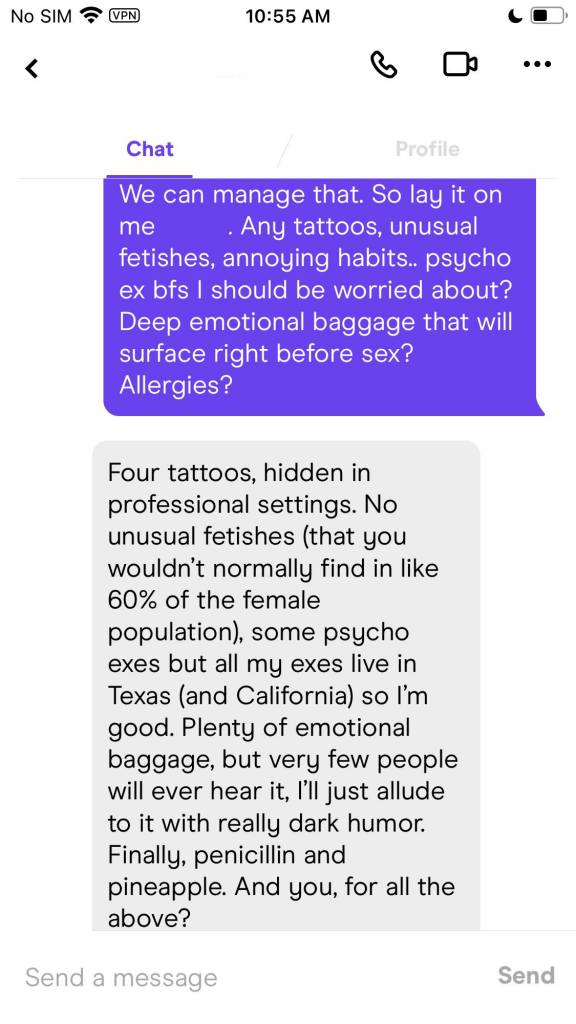 As you can see, the conversation starts with him insinuating that they should meet up for drinking wine (famous PWF technique for setting up a solid date with a girl). But he doesn’t just get bought into the date just because she has agreed to it. He keeps the buyer’s frame by asking some further personal questions that show he has standards. This also bridges the gap between the soft close and the number close (definitions below) to solidify her being more bought in to the idea of meeting up.

Soft Close: A sales term for getting someone to agree to the idea of doing something, before you ask them to agree to actually do it. It increases the chances they comply with the actual request. In online dating and text game, it’s where you throw out the idea of meeting up, but don’t yet actually ask her point blank “Are you down to meet?”. This is a great way to get a feel of where her mind is at in the interaction.

Number Close: This is a step before you figure out the logistics of the date itself. This takes you away from the “random match on the app” category, as now you are a saved number on the phone. Most guys overrate the importance or value of getting a number, but it is nonetheless an important step in the process.

When it comes to online dating, a lot of men get lazy and send texts which don’t coherently make sense. This is something that’s not talked about enough. Women get turned off by this, because grammar communicates intellect. Check, and double check, before you hit that send button. If you blame it on autocorrect too often, she’ll be smart enough to tell you’re lying and sending hasty messages. 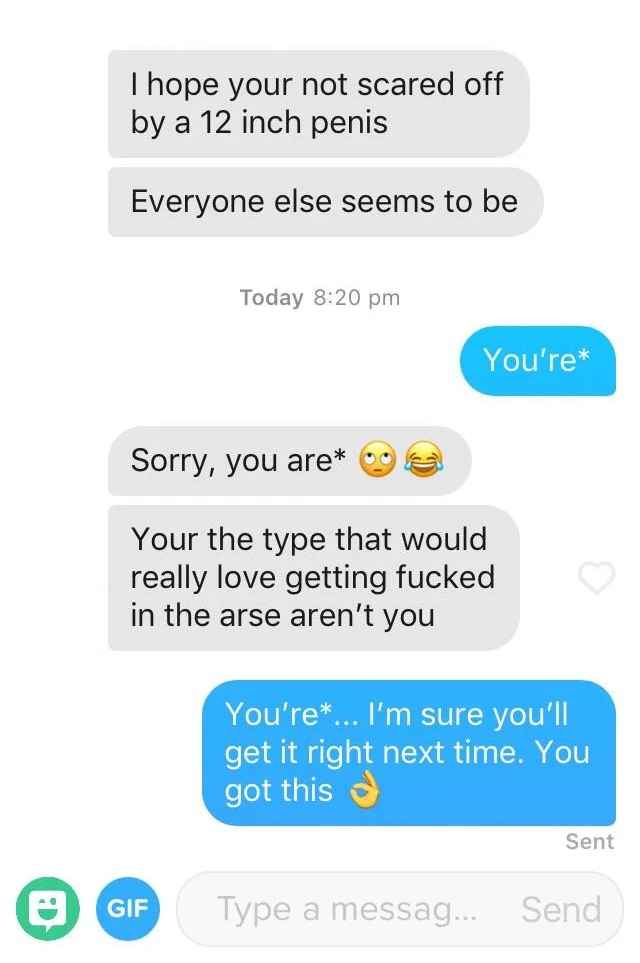 This girl has clearly lost interest since she is constantly correcting his spelling mistakes. Imagine what goes through a girl’s mind. “If he can’t even double check his text before sending, how long is his haste going to make him last in bed?” 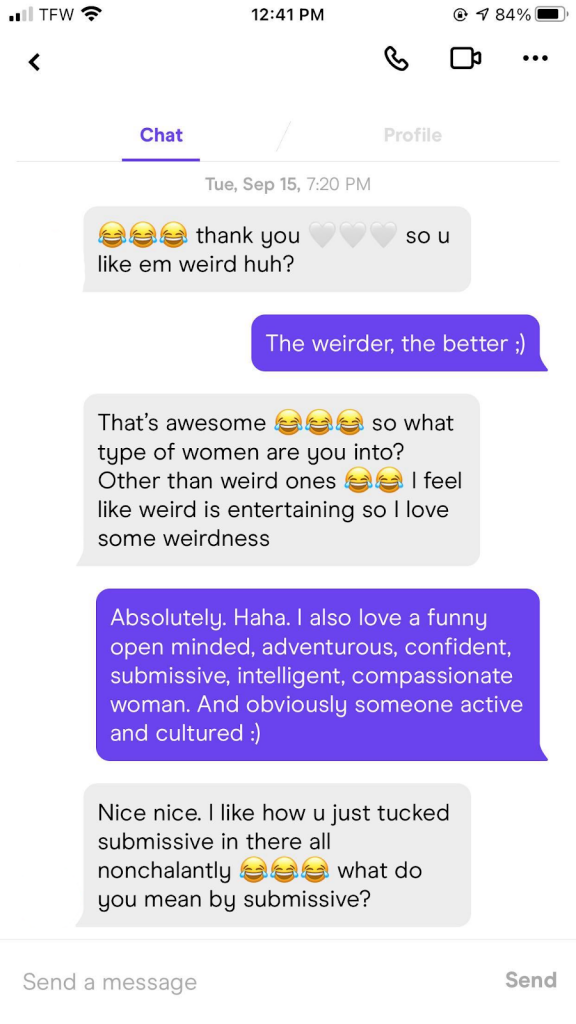 Adding punctuation, knowing the spelling to all the words, and capitalizing the right word for a sentence shows that you care about how you come across. Intellect can go a long way for a woman to be willing to go on a date with you. Again, this actually makes a massive difference since the majority of men on Tinder half ass their interactions.

4. Have a Purpose / Know Your Next Step

It’s crucial to have a plan in your head for your interactions on dating apps (you can use our Tinder framework for men). That way, you know where you stand in an interaction. It’s important that you are always keeping things moving toward the end goal (to have a date & meet her) and avoid pointless texting back and forth.

At first glance, it doesn’t look that bad. But if you give it another read, you’ll see he basically is veering around aimlessly, without much of a purpose. He suggests meeting up, but he doesn’t do so very effectively. The conversation is just kind of all over the place. These questions and answers he went back and forth with are a conversation you can have in person. When you have these conversations over text, the woman doesn’t have much else to find out. The sense of mystery is lost, so they sweetly reject you. Especially when your answers make you seem like a platonic nice guy. 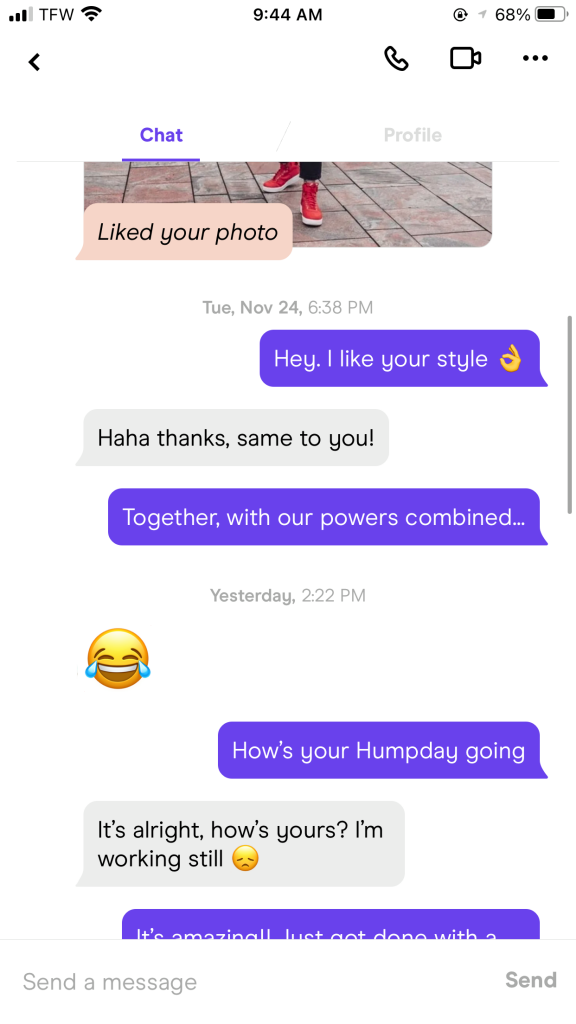 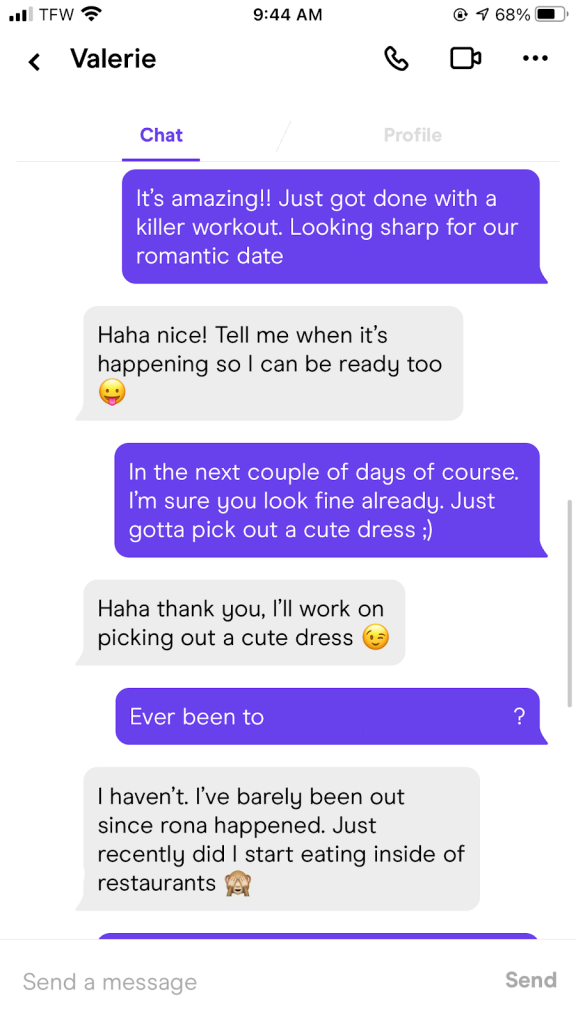 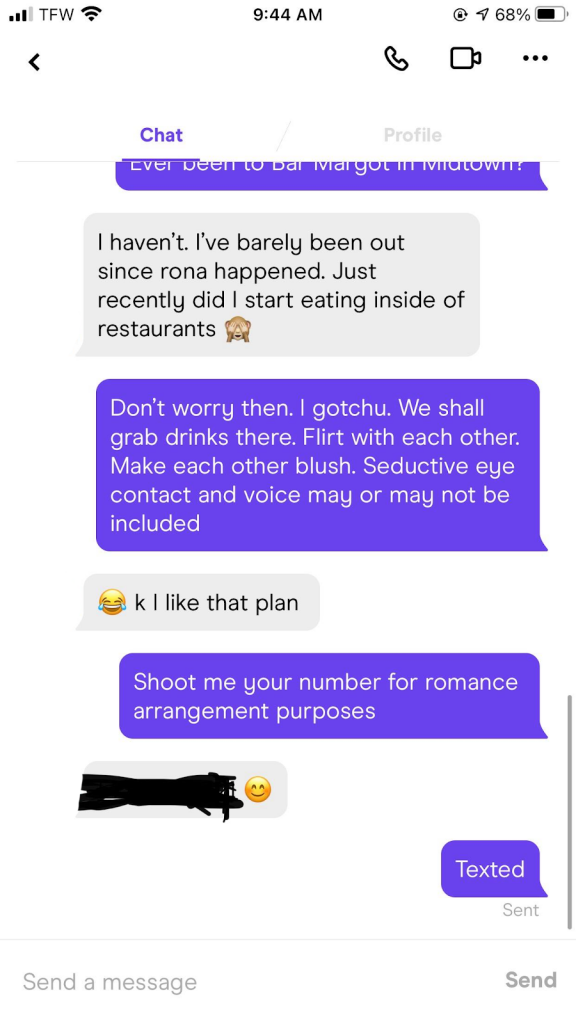 Classic example where the guy has a framework and a plan, and he follows the structure to the T. He sticks to a simple opening message (see #1). Some flirty vibe followed by letting her know that there’s a “date” and lays out a plan for the date. Once she formally agrees to the date’s idea, he goes for the number. As you read through his interaction, notice that each message is focused on getting to the next step in the interaction – never once does he sway away from his purpose.

5. Sexualize the Conversation (But Do It the Right Way)

Being sexual in a smooth, calibrated way sets the right frames. The woman knows what she can expect if she were to go on a date with you. There is however, a fine line between being creepy/pushy and being sexually savvy. You come across thirsty if you don’t sext a girl the proper way. 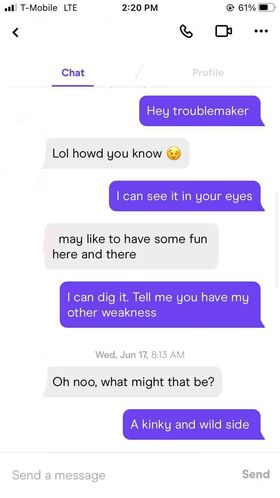 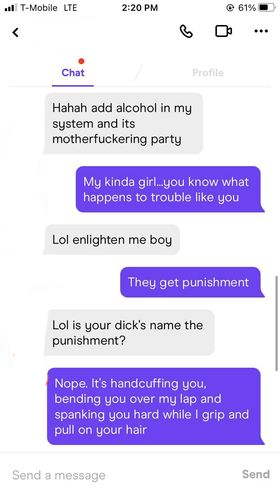 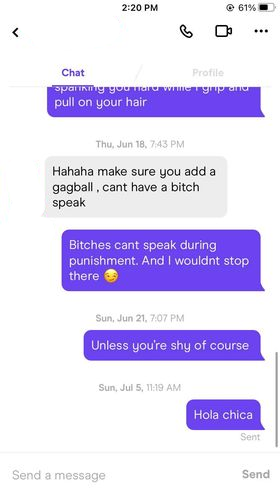 She was trolling him all along. When she said something like “Lol enlighten me boy”, that was his cue to NOT sexualize and actually change the topic. She was laying out a thirst trap for him. He should have instead called her out by simply asking “Boy?”. This would have made her reiterate that weird dynamic she’s trying to establish. When he responded with, “They get punishment,” he fell right into her trap. He took it even further with “Bitches cant speak during punishment.” Without any context knowing she likes to be talked to this way, basically comes across as at least socially austic & creepy, and at worst, borderline serial killer-ish. Basically, he went from 0-100 in sexualizing the conversation, and then he took it even further, and naturally she ghosted him. 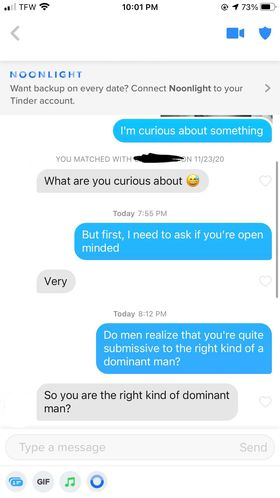 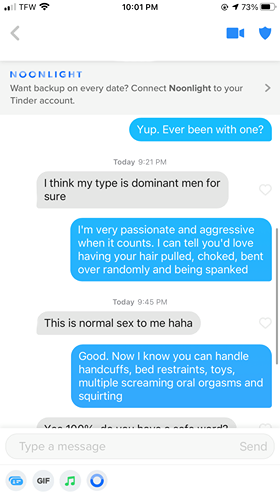 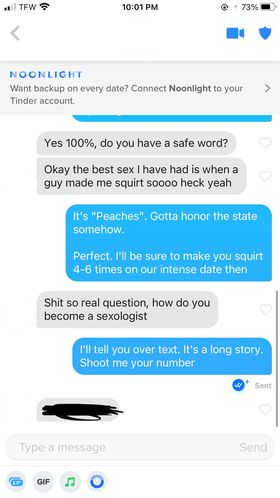 He classified her in the submissive archetype of girls based on the information/pictures on her profile. She bit on it. It’s a high risk move, but definitely high reward as well. She gives a green light that she enjoys dominant men. He notices this, and then he uses it as a green light to go even more sexual.

Reading this from women isn’t always easy. You have to build enough authority and experience with women, and over time, you will be able to read them accurately like in this scenario.

Use These 5 Rules to Improve at Texting Women

Remember, having a good bio and pics is a start, but it will only get you the match. Once you’ve got that match, you have to be effective at texting to keep her interested. These are some of the most important rules I follow when I message women on Tinder. I encourage you to re-read this post again, and then internalize these 5 golden texting rules in your mind.

By really understanding these rules, and the mindsets behind them, you’ll increase your confidence when texting and replying to girls. With practice, you’ll see your online dating results jump up big time — more dates, and of course, more into lays.