Like I did in my first post on How to Message on Tinder, I’m going to take one of my Tinder Lay Reports and break down every message in the interaction. Starting with the opener…through sexting, sending nudes, handling objections…all the way to some very kinky sex (this was one of my kinkiest hookups!). 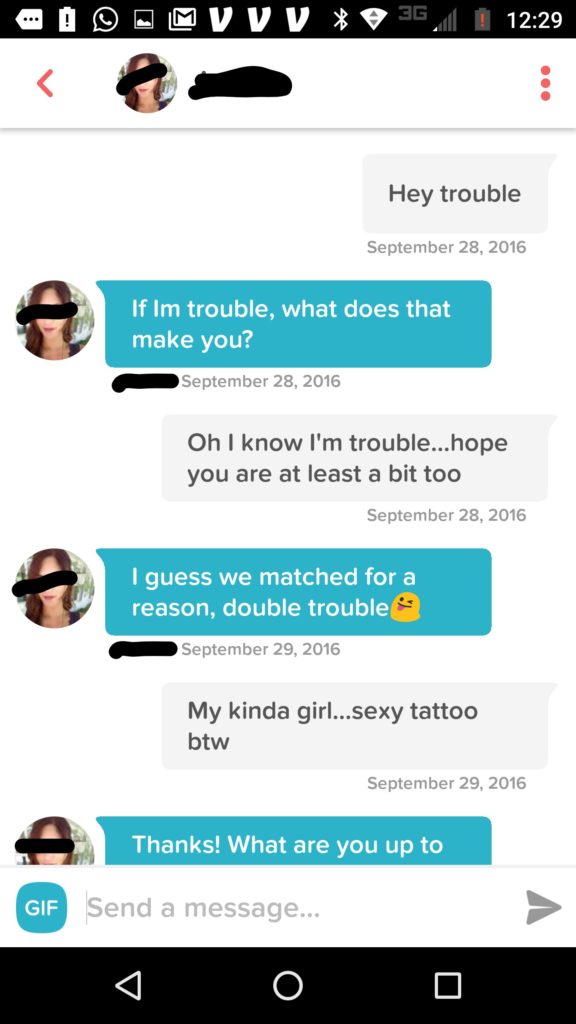 I messaged her first using my favorite opener (at least before everyone in Los Angeles started using it). She gave me a bit of a shit test right away. Feisty girls will commonly respond this way.. the best way is to deal with this type of comment is to fully own it. In my response, I do that and then subtly make her qualify. Notice, it’s also very easy to respond to. That is one of the golden rules of Tinder banter. If I had just said “Oh i know I’m trouble” It would’ve been much harder for her to think of a response.

She gives me the ideal response, saying “we” matched for a reason. For building comfort, talking in the plural is much better then the singular, because instead of being two separate entities, you are now a team. I reward her in a nonchalant way “my kinda girl”…reinforcing that I am the one qualifying her. Then I follow it up with a compliment. Like dick pics, compliments can be very effective…if used correctly: 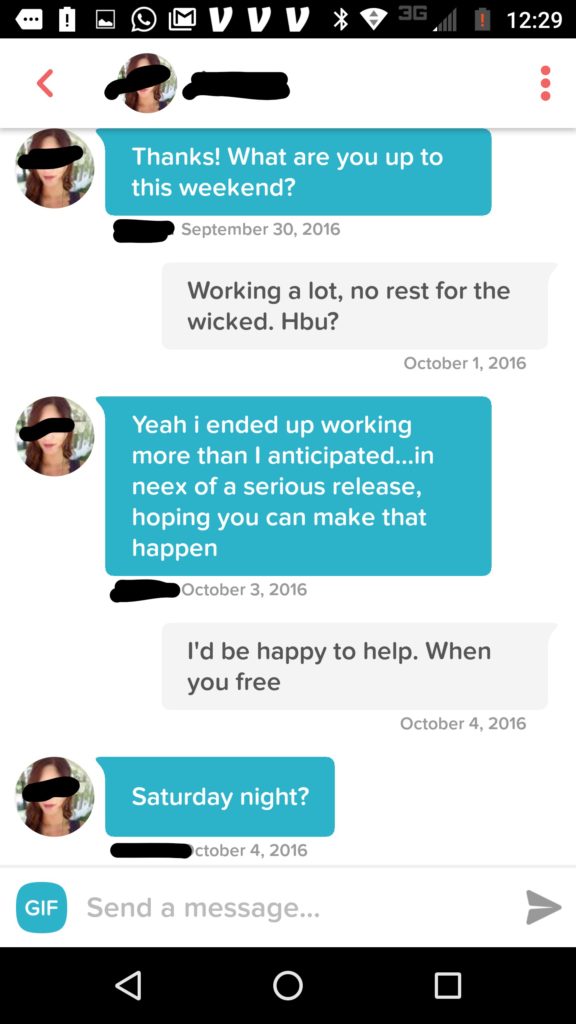 The next two lines are standard banter. When girls ask you what you are doing this weekend/tonight/tomorrow/ etc  it usually means they are looking to meet up at that time. It’s good to be nonchalant and let them invest more, while not making yourself seem too available…and always add in a “hbu?” at the end to make it easy for them to respond

She offers a day and i tell her to come straight to my place. We have established that we are going to fuck so it logically makes sense to meet directly at a location where sex can take place (i.e my lovely apartment)

She sidesteps my invitation. From her response, i can tell she is not sold yet. She wants more rapport and to make sure i’m going to be a good lay. I deal with this concern by giving her a preview of what our hookup would look like, writing it in a visual way that turns girls on (if you want more examples on how to write in a way that turns women on, read 50 shades of grey. It was a best seller for a reason)

Word of Caution: Dirty Talk is another one of those things where less is more. Don’t overdo it. You want to give a sneak peak, not the whole movie. Otherwise there is no point for the girl to meet up with you. Once you have given her a taste, its time to move the interaction forward. 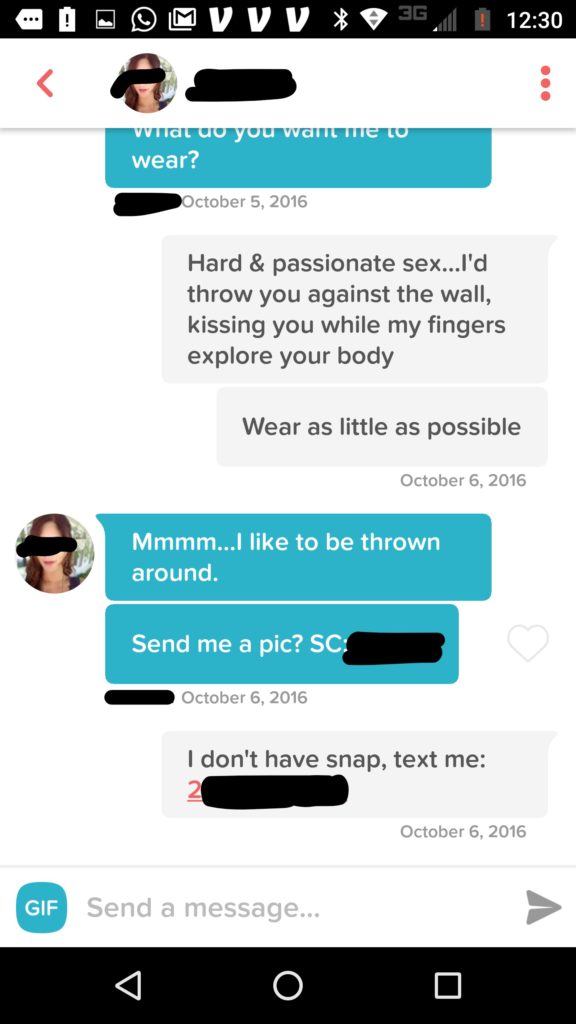 She likes my scenario and tells me to add her on Snapchat. I tell her to text me instead. My general thought process is that, if after all this the girl isn’t going to give up her number, then there’s no way she was going to actually meet up and was just a waste of time anyway 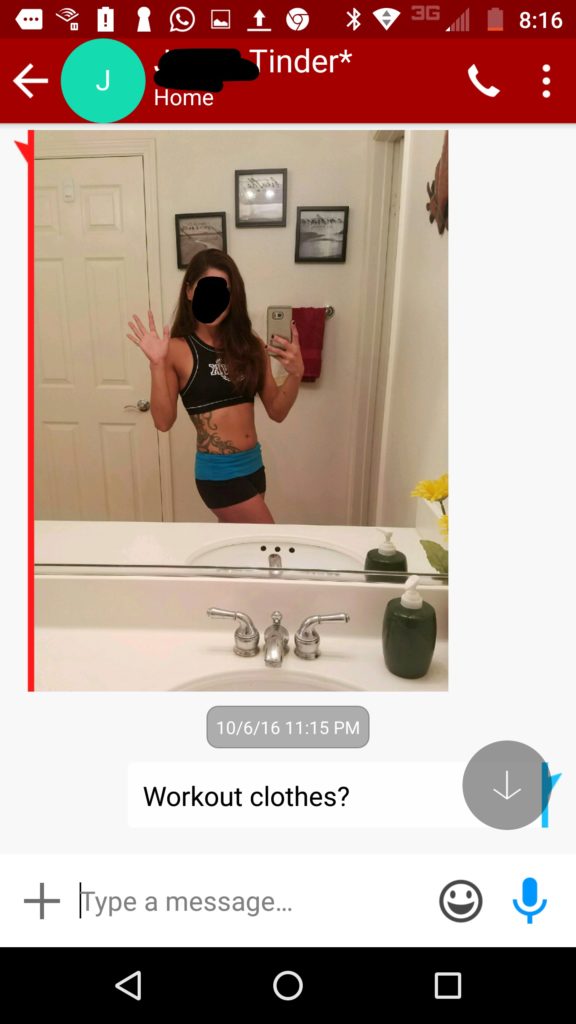 Her first message, is a picture text and I respond with a very astute observation. 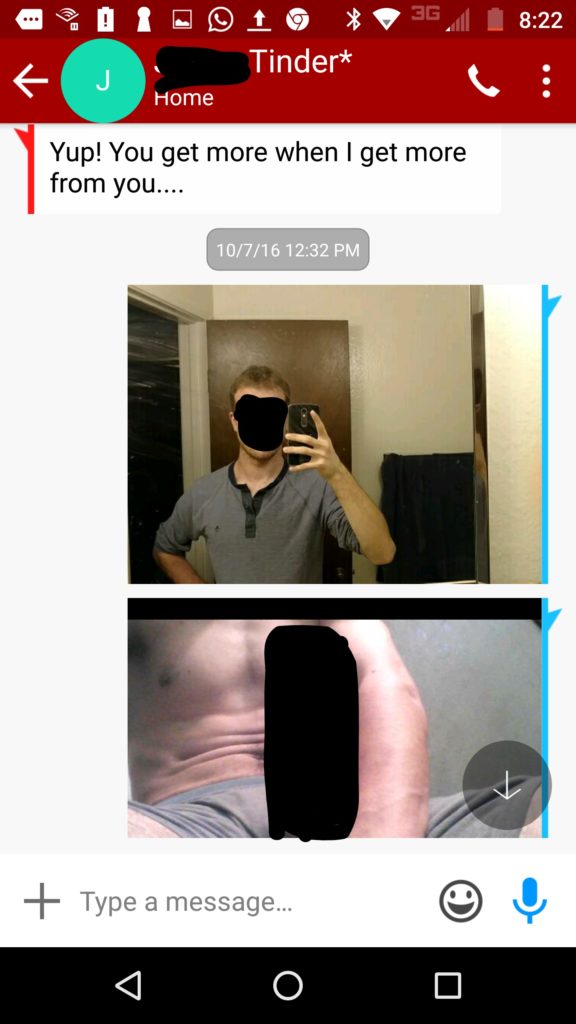 She wants more pics of me, most likely to make sure i am a real person. Since she has already invested and sent me a pic, I feel its ok to send her two pics (selfie and dick pic). Otherwise, I would only have sent one.

I talked about this in Part 1, a lot of guys think girls hate getting dick pics, its not true. Girls don’t particularly enjoy getting random, out of context dick pics.  In this situation, the context is 100% here. We are making plans to hook-up and have been talking about fucking the previous few messages. 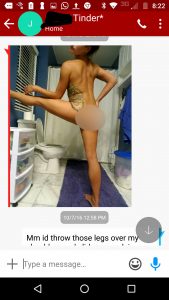 She responds back with a naked pic of herself. Perfect. However, I don’t want to be just her pic sharing buddy, so i cut that thread by sprinkling in a little more dirty talk in the conversation…like with sexting, exchanging nudes can be effective (builds investment and comfort), but you don’t want to overdo it. Always keep the goal in mind…the meet-up.

She responds with more dirty talk. Here, again I cut the thread, as naturally as I can, and go into logistics. Its important to always keep the interaction moving forward and not get stuck on one part of the conversation (opener, banter, trading pics, sexting, etc). Also, she never actually told me she could do saturday night, but purposely assume she had in my question… It’s always easier to confirm plans then to set up new ones 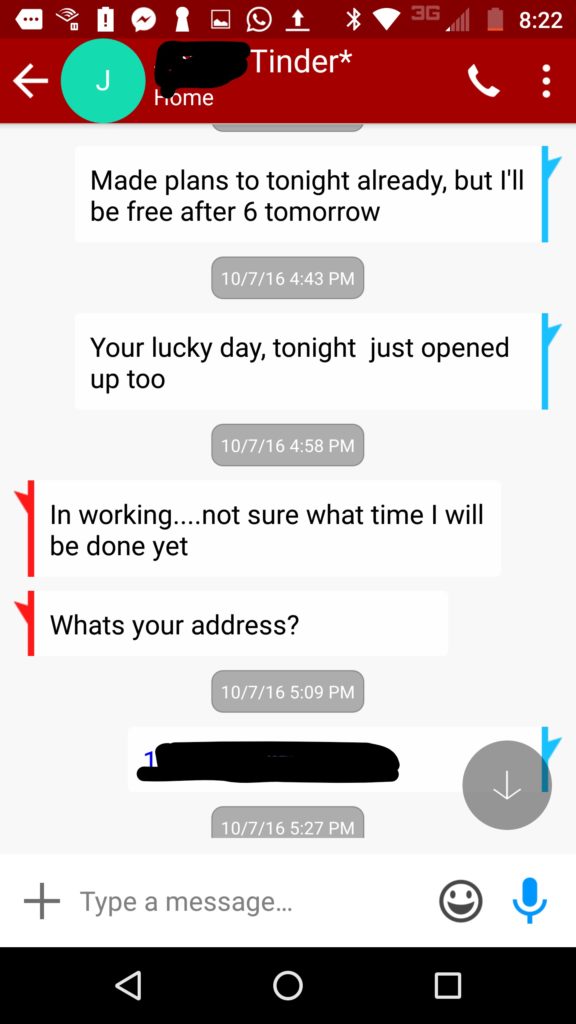 Like with the previous girl, she wants it right now. I already have another girl coming over that night, so i have no choice but to put it off. However, a few hours later the other girl flakes and I text this one that I can actually meet tonight… in the most nonchalant way that I can. As, I have learned many times, the longer you wait, the more likely you are too get flaked on 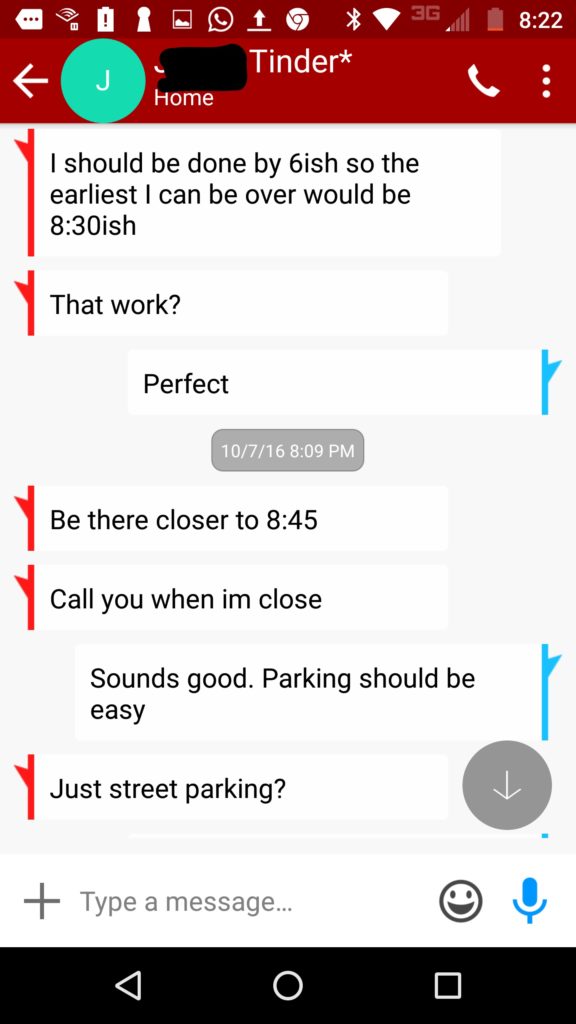 The next text is all logistics. Very straightforward. Hard to fuck up here. Just be patient if she is taking a little longer to respond and don’t double or triple text 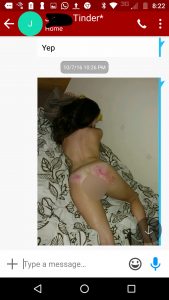 She calls me when she is outside and I come out to grab her. She is cute: a skinny athletic brunette with some curves and a pretty face. I lead her inside my apartment and we go to my  room. She is playfully feisty from the start and we joke around for a few minutes.

I can tell by her energy that she wants to get fucked. So I pull her in and we start making out. Her eyes light up when I bite her neck. I can tell she is going to be a kinky one. I rip her clothes off, put a condom on, and start fucking her. She cannot get enough. Telling me to fuck her harder, pull her hair, choke her. She is speaking my language and I happily do all those things..and more. Like me, she has a very high pain tolerance and has me spank her… really hard… like to the point where my hand actually hurt… It was really hot

Afterwards I saw her ass starting to turn purple and took a picture. She wanted me to send it to her as well, which is, what the picture text you see in the screenshot above 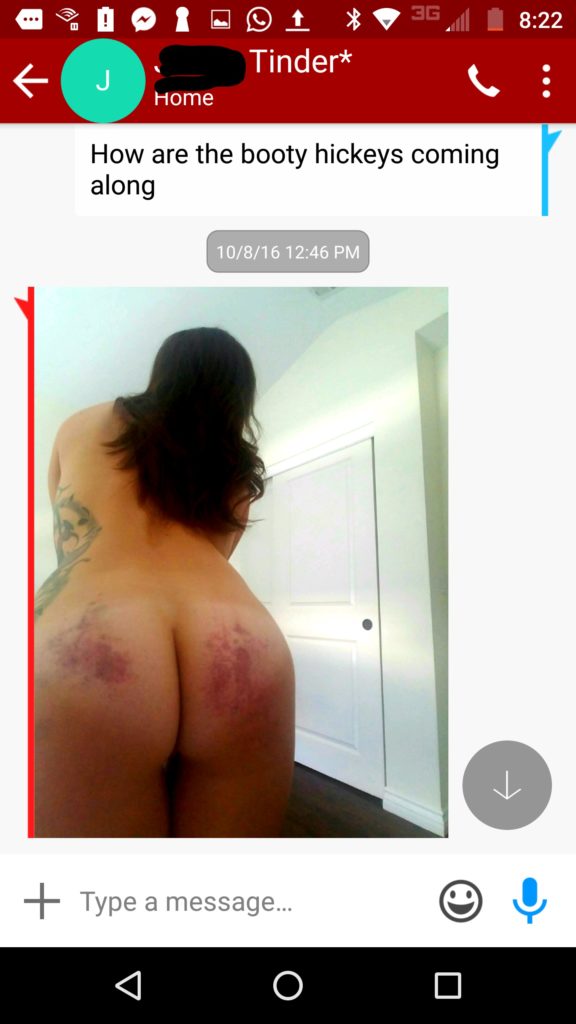 I texted her the next day and she sent me a picture of her ass. Oh damn, i wonder what happened here… 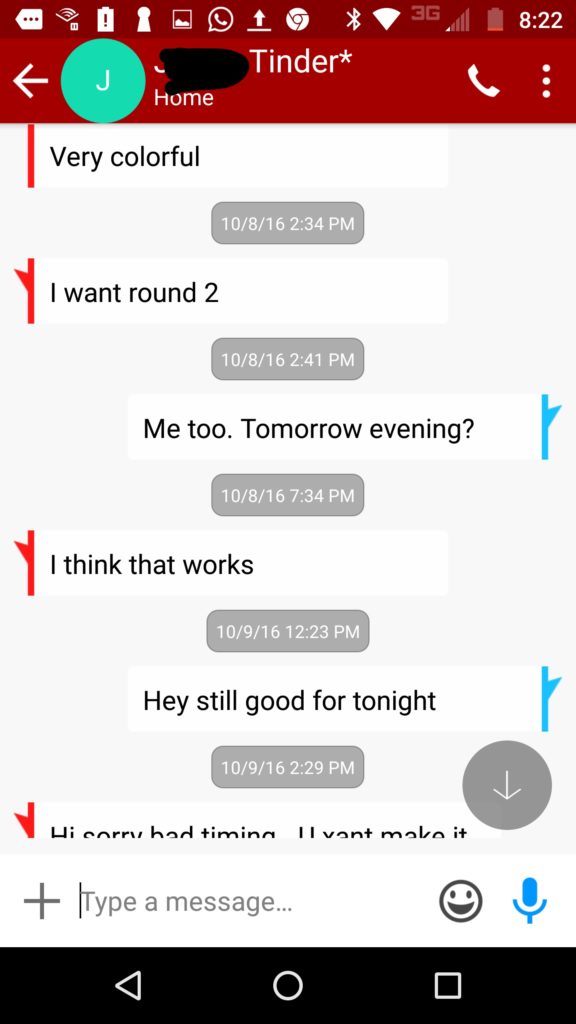 We both were into the same thing sexually and got along pretty well. She shared my fucked up sense of humour so we would chill for hours telling fucked up jokes and well..fucking. She wound up becoming my regular booty call for  a few months, until she moved back to her home state.