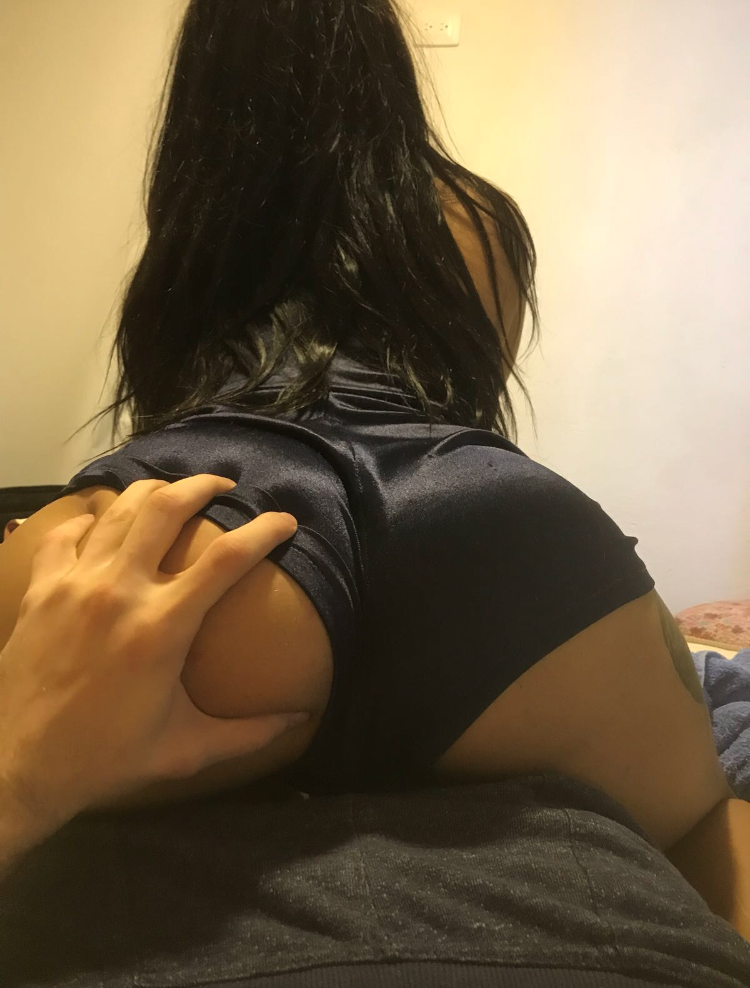 I wanted to write up a lay report from my recent trip to Colombia for any one who lives in or is thinking about going to Central or South America (which every man absolutely should). I did a full guide on How to message in Latin America here and this is a great example, but this time 100% in Spanish (mainly using google translate). For my fellow gringos, I also provided a full translation of everything

I met this chick on tinder in Cartegena and as most of my lays from this trip went, it was all in Spanish and straight to the house “for wine”. 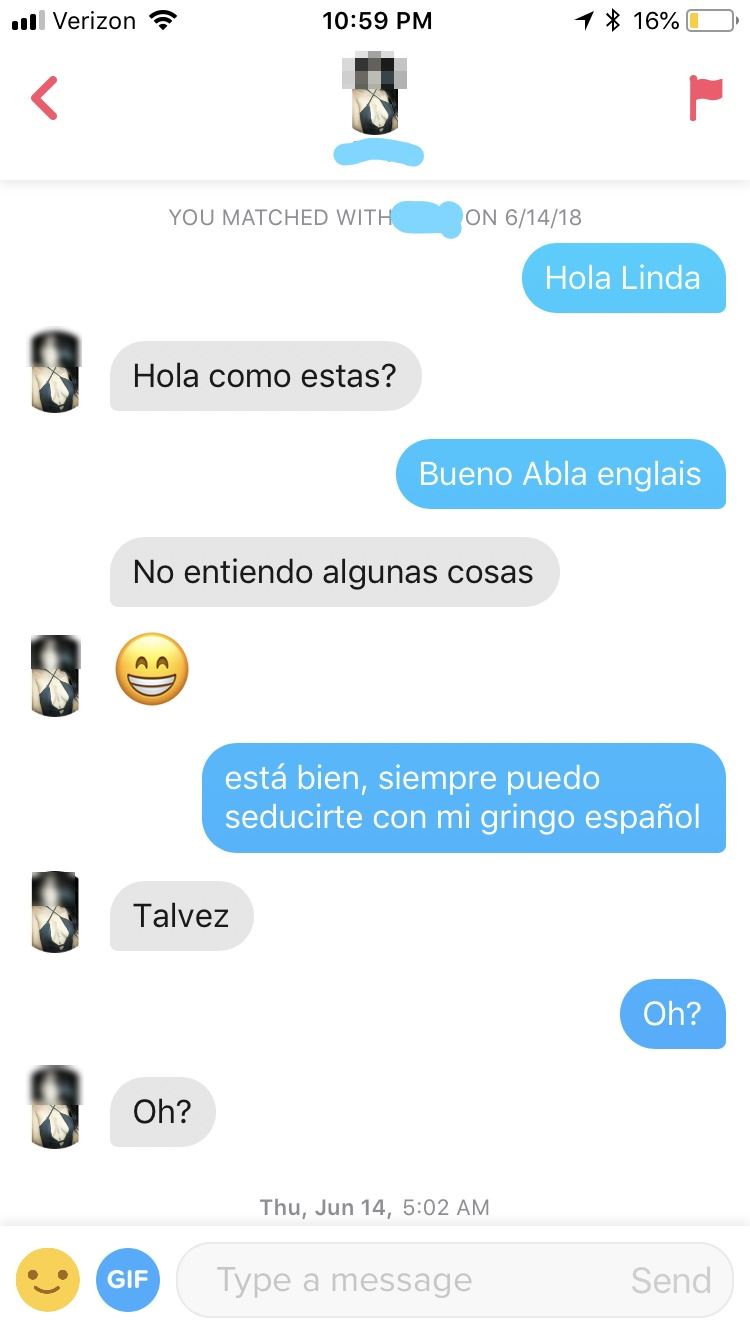 I use my favorite opener in Spanish “Hola linda”, which basically means “Hey cutie”. She says “Hey how’s it going”. I say “Good, do you speak english?”. I always make this my second question to decipher the girls English ability so that I can get an idea of how to best communicate to her. She says “No entiendo algunas cosas” which means “No I understand some things”. This indicates to me that the whole thing will be in Spanish.

I follow it up with another one of my favorite flirty lines “It’s ok, I can always seduce you with my gringo espanol”. She says “maybe”. This is a very unusual response as most of the girl find it funny and respond with something much more positive. I just write back “oh?” and she mirrors me “oh?” 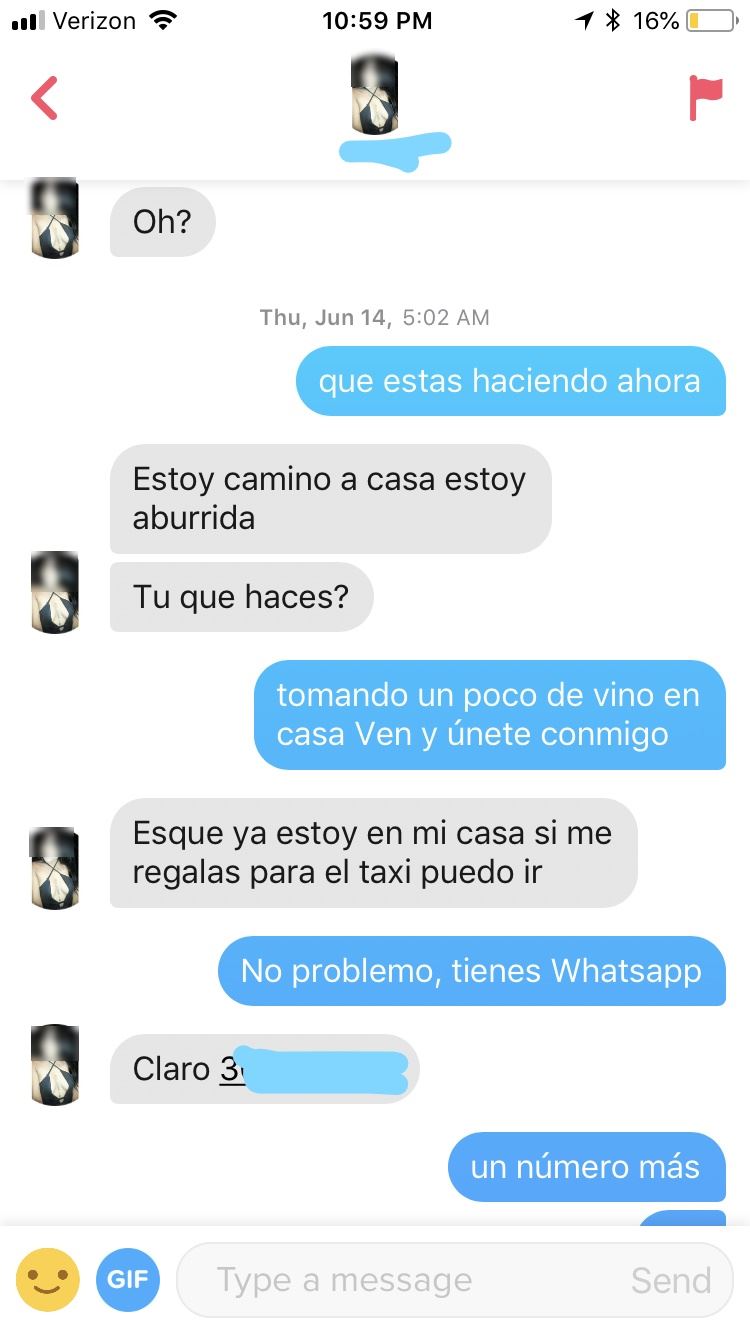 The cool thing about gaming in Latin America is that you really don’t have to play nearly as many games so I try a new approach and ask her “what are you doing right now”. She says “I’m walking home. Im bored. What are you doing?” This is a good sign and I respond with “Drinking some wine at home, come join me”

She say’s “I am already at home, but if you get me a taxi I can go”. This is actually very common in Latin America. If you invite a girl over, you either order her an uber or pay for her taxi. However, that shit is only a few dollars there and is significantly cheaper then going out an even paying for your own drink in America. I tell her no problem and ask for her whatsapp 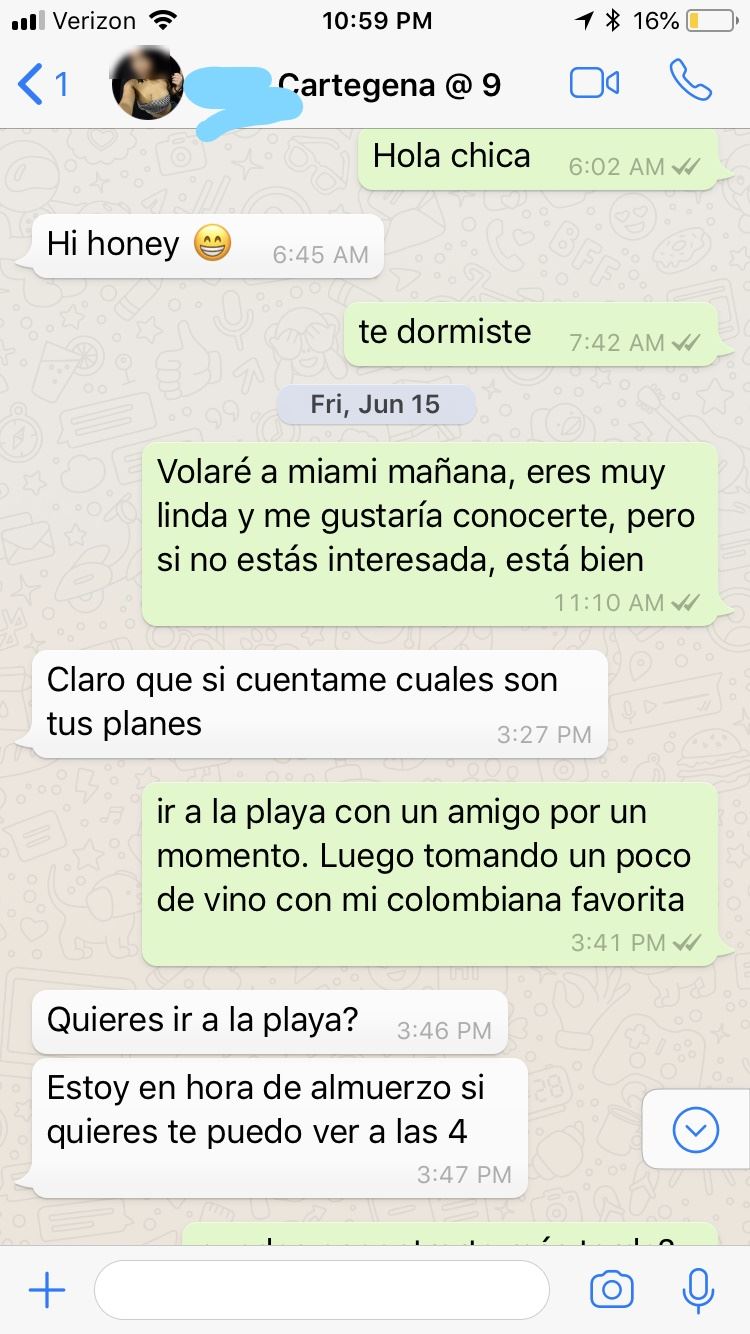 I mesage her on whatsapp “Hola chica”. She write back in english, but not until 45 minutes later. At this point, I was already focused on another girl and didn’t respond to her until an hour later “You sleeping?”. She likely was already and didn’t respond. I then sort of forgot about this chick until two days later when I was going through my phone mass sending a “yo this is our last chance” message that has worked pretty well for me. “I am flying to miami tomorrow, you are very cute and I would like to meet you, but if you are not interested, its ok”. This works well because it creates fear of loss and urgency, while at the same time showing non neediness.

She responds back with “Ofcourse, if you tell me what your plans are”. I respond with “Im going to the beach with a friend right now. Then afterwards having some wine with my favorite colombian”. She write back “You want to go to the beach? My lunch time is at 4 and I can see you then” 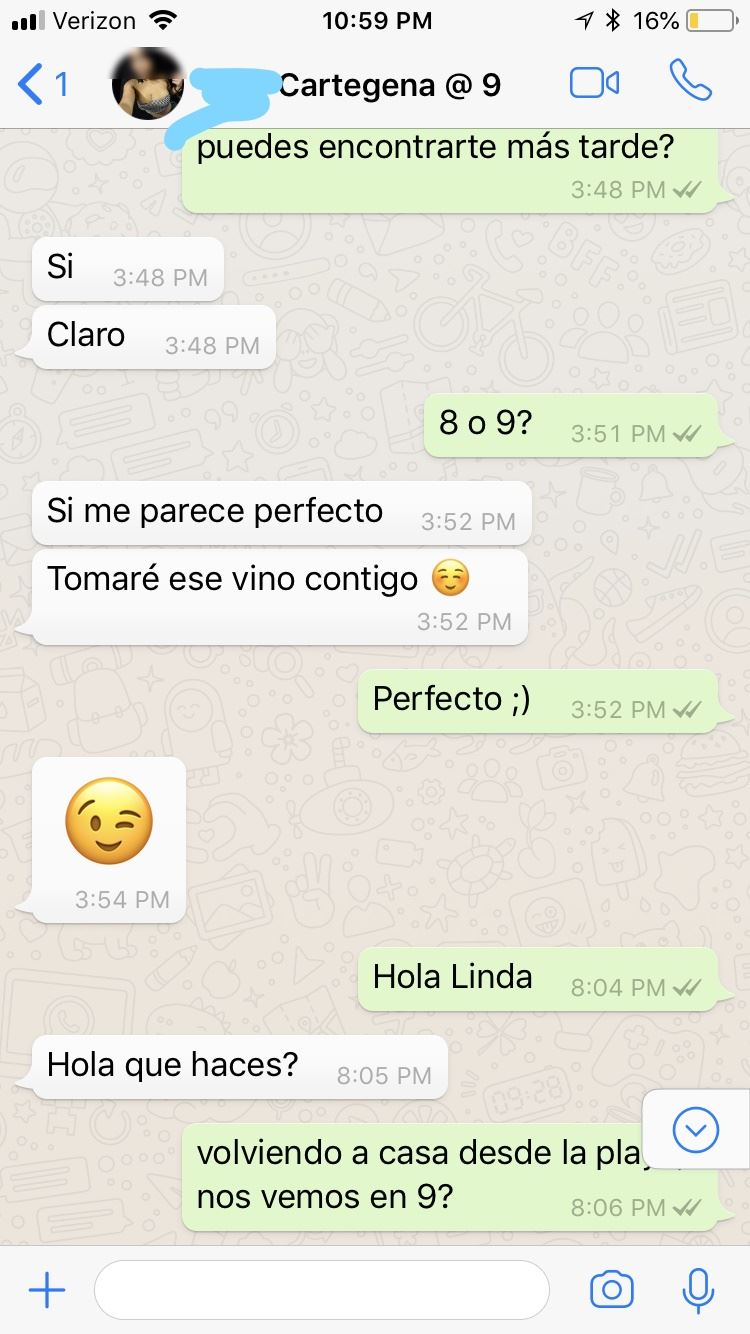 I had already made plans with my buddy that I wasn’t going to cancel and so I respond back with “Can you meet later?” She says “Yes, ofcourse”. I ask her “8 or 9?” She says “Yes, that seems perfect. I will take another wine with you.

I message here at 8, re initiating with the ever effective “Hola linda”. She says “Hey what are you doing?” I say “coming back from the beach. See you at 9?” 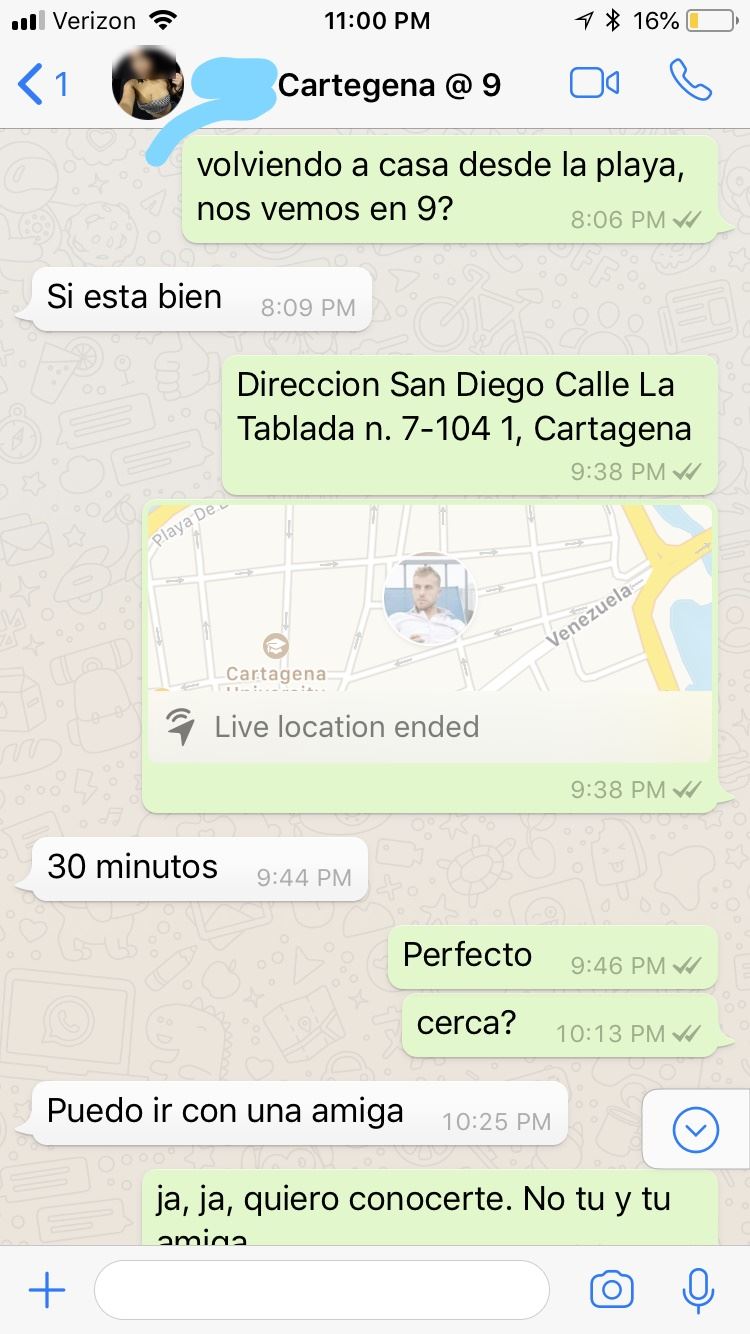 She says “Yes, thats good”. I then send her my address as well as a live location (cool feature in whatsapp). She tells me “30 minutes. Ofcourse in colombia everyone is always late and after 30 minutes go by, I message her “Close?”

She throws me a curve ball and writes back “I can go with my friend”. However, I wasn’t having it. One big thing, I learned this trip is NEVER EVER do group dates in Colombia. The girls will be individually dtf, but will cock block each other relentlessly. Me and the friends I was traveling with actually tried a few and they all were a giant waste of time. By this point, I had already made a mental promise to never do another group date again, so my response was “haha I want to meet you. Not you and your friend” 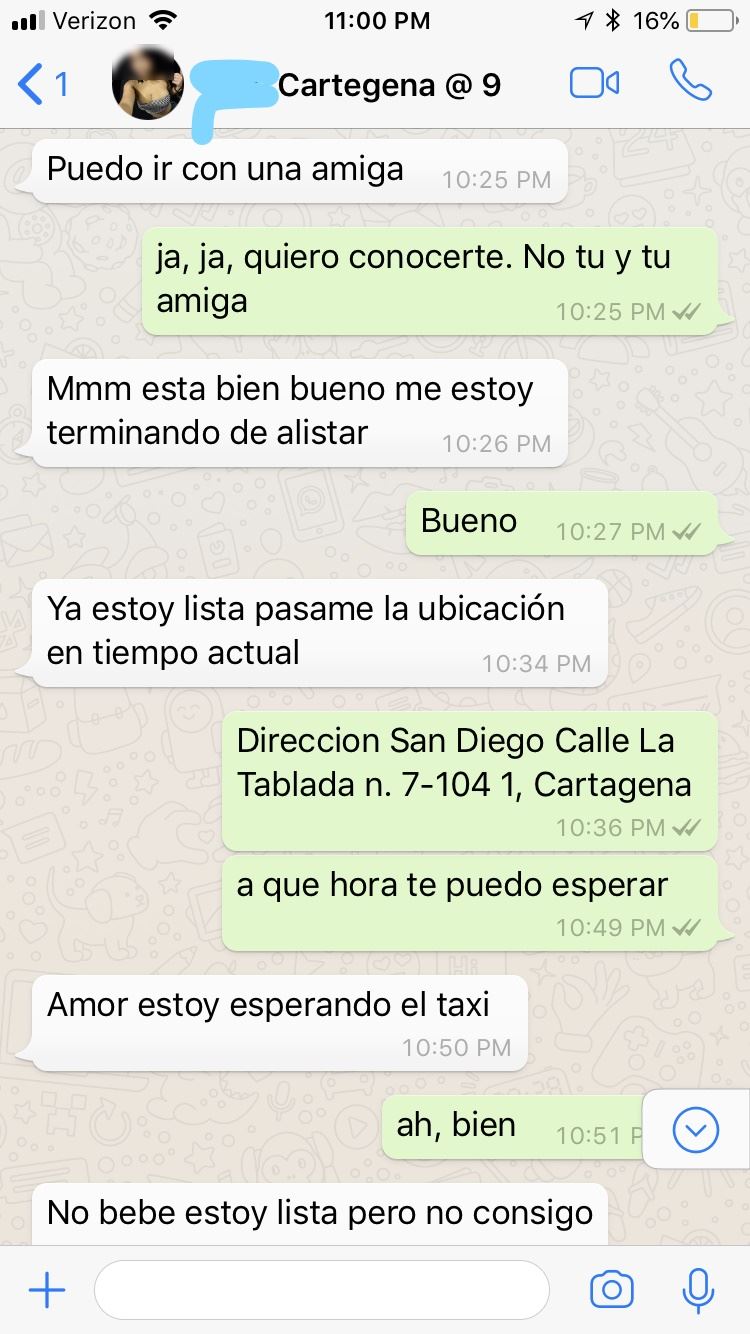 She responds the way I was hoping “Mmm it ok. Im ready”. I say “Good”. She writes back “Im ready, just give me the location in current time”. This confuses me a bit so I just resend her my address. She doesn’t respond so ten minutes later i write “What time can i expect you?”

She says “Love I am waiting for the taxi”. I say “Ah, good”. She responds with “I am ready, but I can not get one”. Transportation issues like this are actually super common in Colombia. Don’t be surprised if you have to go through 5 ubers, before one actually picks the girl up (No joke, it happened to me). This is why you always have to be on your toes and read to problem solve until the girl is actually in the car on the way. 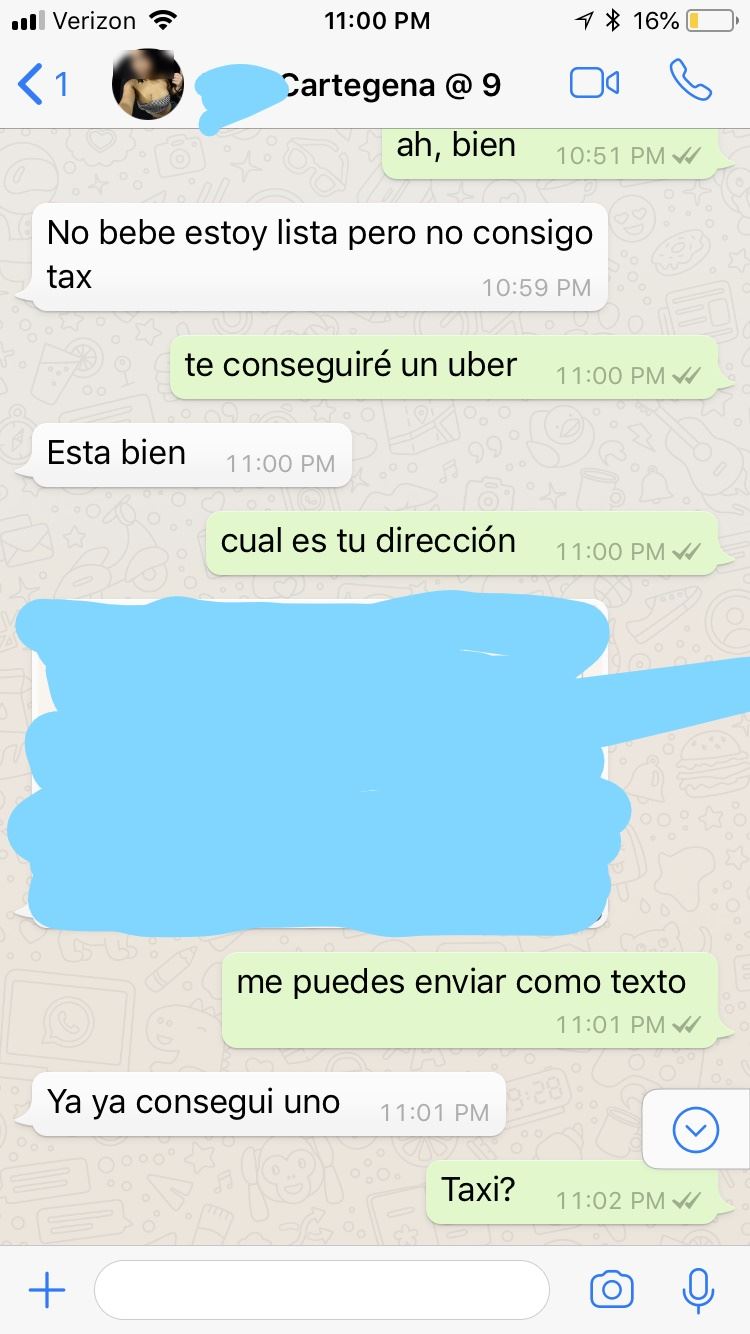 I tell her “I can get her an uber”. She says “That works”. I ask for her address and she sends me a screenshot of where she lives. I ask her to send me the actual address. She writes back saying “She found one” 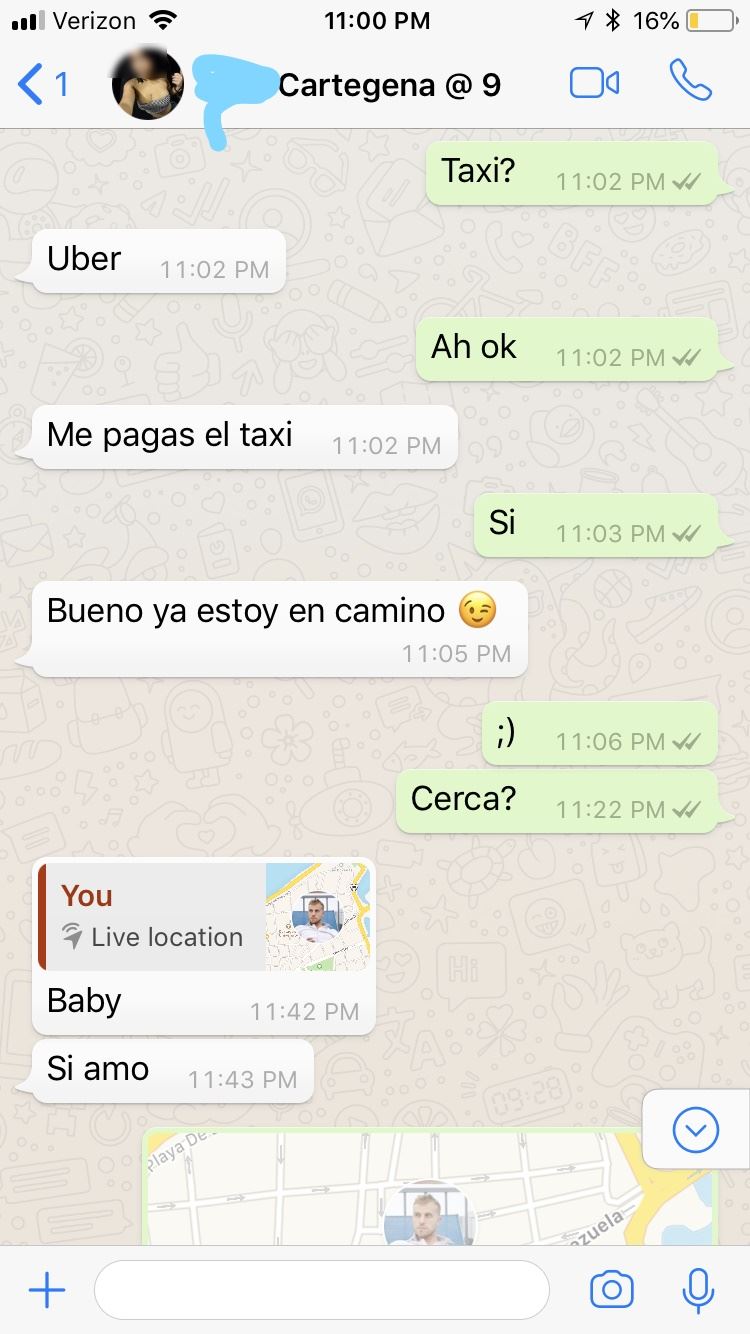 I am a bit confused and ask for clarification. She tells me she is in an uber, but then says “you pay for my taxi?”. A bit confusing, but I just agree. 20 minutes later i message her again “Close?”. She says yes and asks for my live location again 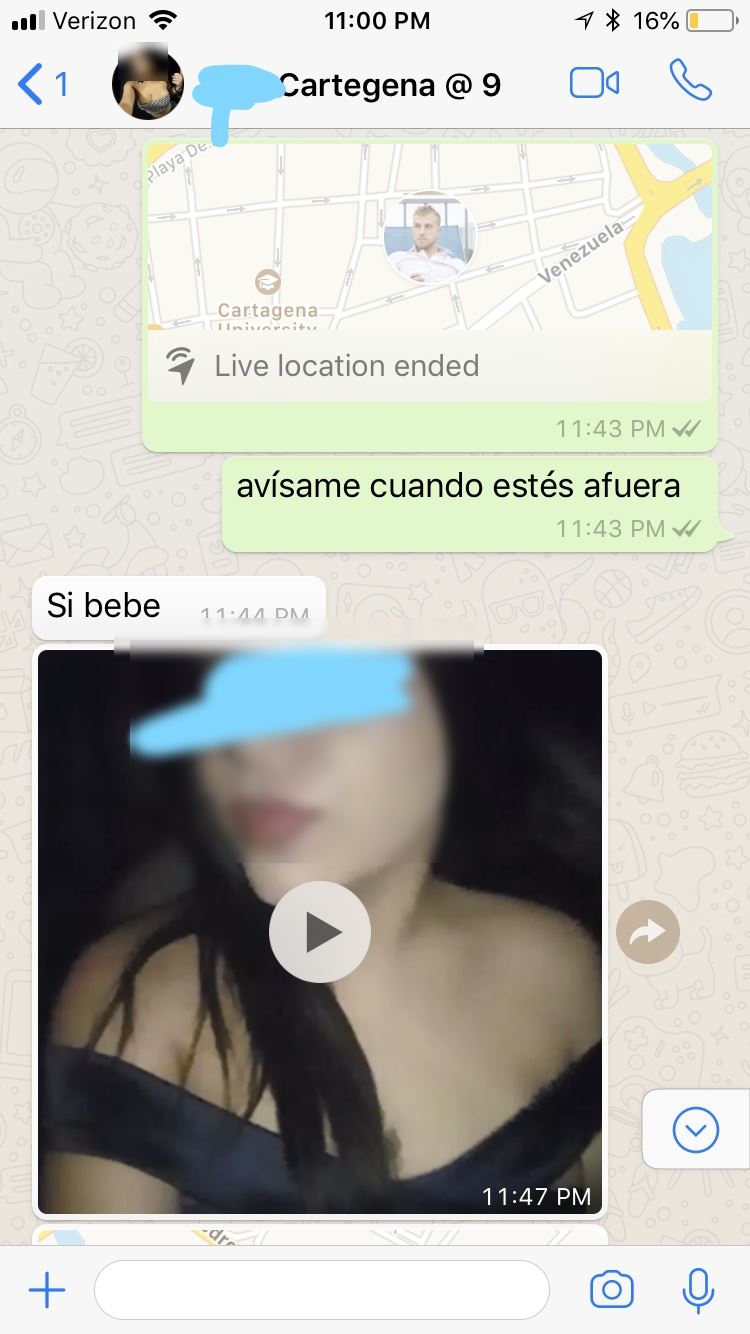 I send her my live location and write “Tell me when you are here”. She say’s “Yes baby” and sends me a video of herself in the taxi. 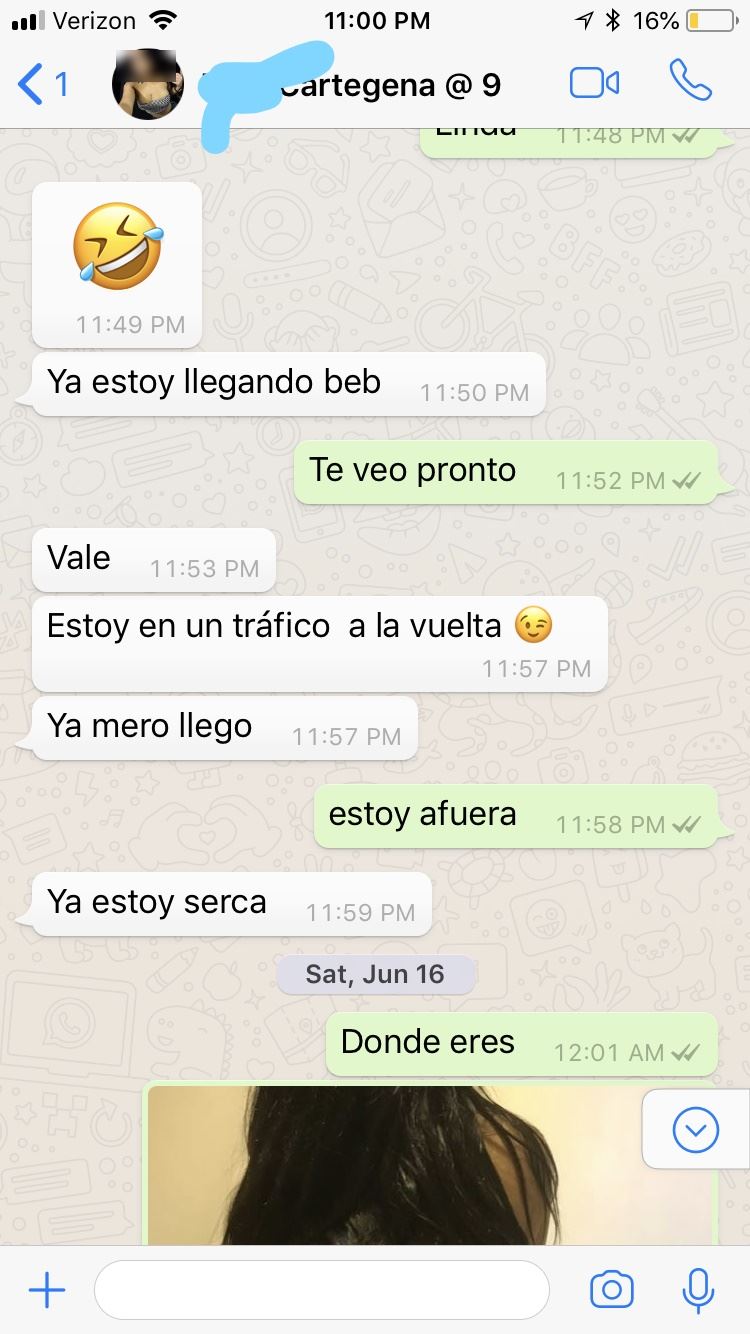 The rest is all just logistics. She says “Im arriving” and i say “see you soon”. Then she tells me she is stuck in traffic, but she is almost there. Then I say “Im outside”. After a bit, I finally see her pull up. She is cute as fuck. Petite, light skinned colombian, with a nice booty.

I give her a hug, pay her taxi a few dollars, and lead her straight to my bedroom. She doesn’t speak word of english, but has a very sexual energy. I can tell this chick just want’s to get fucked. We have a glass of wine and i crack some jokes in my broken spanish. After 5 to 10 minutes, I start escalating. She gives me a little bit of token lmr (common in Colombia), but a few more minutes and we are going at it.

She wieghed less then a hundred pounds so I could very easily toss her around my bed, which she loved. Her moans were sexy as fuck also. I fucked her close to an hour in every position I could think of. Then, I pulled out and made her squirt really hard all over my bed with my lips and fingers. It was really sexy and I finished all over her sexy body right afterwards.

I could tell she was a bit embarassed afterwards as the whole bed was literally soaking wet. I laughed, told her it was no big deal and flipped the mattress. We chilled for another half an hour afterwards, before she left. 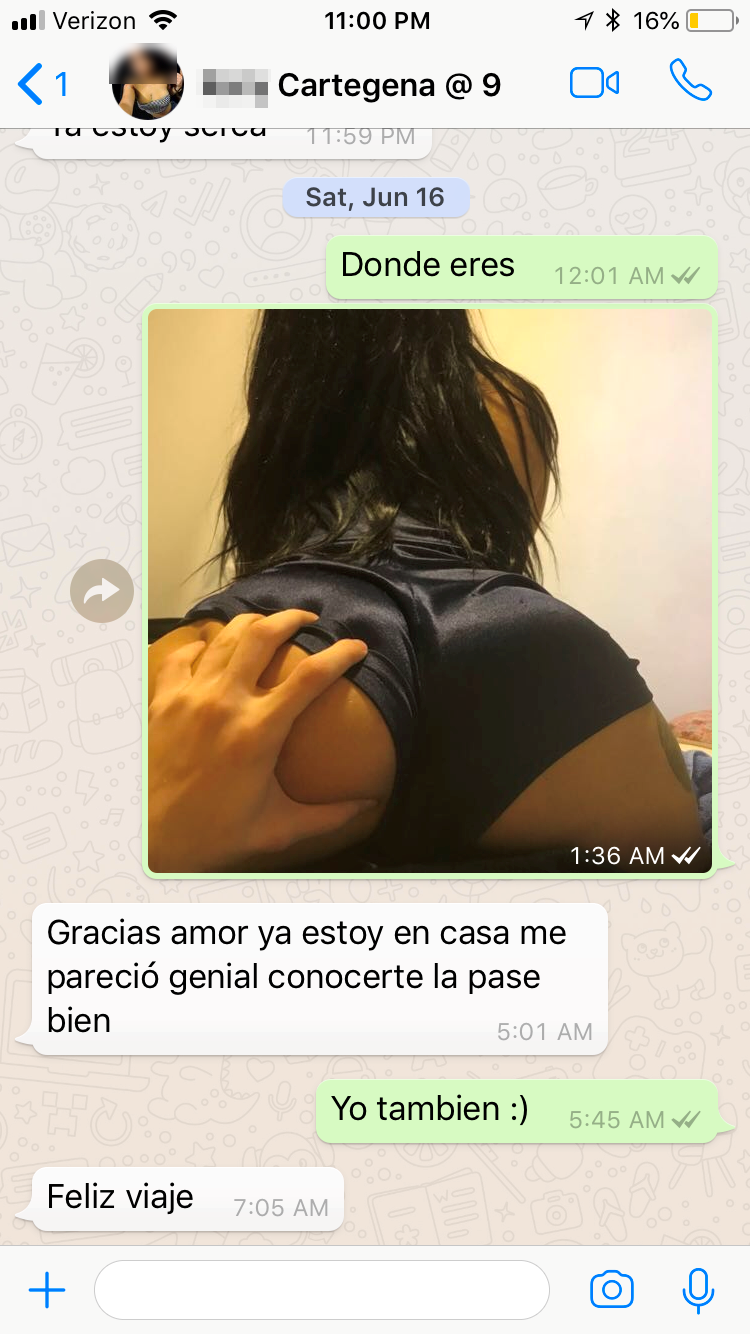 She asked me to send her one of the pictures that I took. She sent me a text afterwards saying “Thanks love. I made it back home. It was really great to meet you. I had a good time” and I said “Me too ;)”

The biggest difference you will probably notice between this lay report and some of the other ones on the site, is just how simple & straighforward it was. I have had ones in America that went like this also, but they are the exception not the Norm. However, in Latin America this is the best way to go. I always throw in a few flirty statements like “Seduce you with my gringo espanol” or “Seeing my favorite colombian”, but overall i keep it simple and just move things forward

I avoid going explicitly sexual over text and just screen for “dtfness” by inviting them straight over “for wine”. In latin america, it is better to avoid being explicit due to the strong anti slut defense, even the sluttiest girls will have. While you will lose some who were dtf, but just wanted to meet in public for safety reasons, you should be getting so many matches that it really is not a big deal.