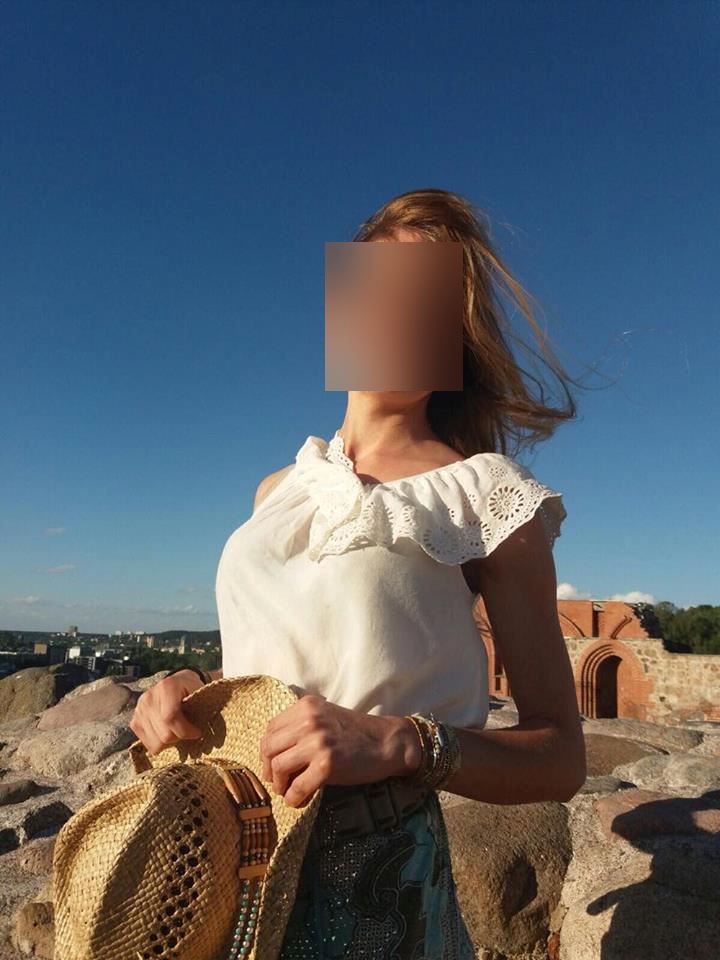 After the Asian Aussie Girl left, I passed out pretty quickly. Unfortunately, I once again woke up in the middle of the night after a few hours of sleep (This pattern continued for the next few days. I would sleep a few hours, be mildly functional until 5 or 6pm, and then go into full zombie-retard mode). This was my second day and I wanted to do some “real life” game. The day before, I had met up with two cool Norwegian guys, one of whom I was in touch with from my Facebook group. I texted them around noon and they told me they were on a rooftop at a building near the center with three girls. I decide to grab a coffee and head over.

I wanted to do a few approaches on the way over. First approach was a quick blowout. As, I’m nearing the building where my buddies are. I see a cute blonde, with nice tits, and a cowboy hat walking a small dog. I think she must be American and open her “hey are you American”. She says she from Finland, and just likes the hat. Right away we click. She is super friendly and is asking me a lot of questions about myself. I discover that she is a recently divorced mother of five kids (total milf). She had just dropped off the kids with their dad and had a few days alone in Helsinki, before going back to her small Finnish town up North, with all the reindeer

Five minutes into the conversation, I ask her what she is doing right now. She responds positively, saying she is not doing anything and asks me if I want to get some food or coffee with her. Not wanting, to let her take the lead. I suggest we stop by and meet my friends real quick and then get food. She agrees. Her only concern is that they wont let the dog in the building. She starts telling how Finland is not dog friendly at all and how basically with a dog, you cant go into most places….ah the struggle

Fortunately, no one says anything about the dog and we take the elevator to the top floor. The Norwegian guys are sitting at a table eating sushi, the girls had already left. I introduce her as my Finnish girlfriend and we both order some rolls.  She is fun and we all have a good time making fun of Scandinavian culture. However, after a bit, I get the feeling that the interaction is loosing a bit of momentum. We are all hanging out and having fun, but the sexual tension between me and the Milf is slowly going away. I need to get her 1 on 1 again. Once, we both finish eating. I tell my friends we are gonna head off and we ask for the check. The cool thing about Finland, is that every girl is without question going to pay for herself. That is just the culture. None of this “the man pays” expectation.

She asks me If I want to go, because her dog is getting restless and needs to walk. Perfect. I tell her to follow me, that I know where we should go. She doesn’t ask any questions and says that I can be her tour guide. Perfect. We are about 20 minutes walking from my Airbnb and I start walking straight to my place. We walk pretty slowly, due to her dog’s needs to stop everywhere. I use this time to build a little more comfort and tension. Surprisingly, she doesn’t raise any objections about where I am taking her, the whole way over. Note, I had been flirting with her a bit, but this was far from a sealed deal yet.

We arrive near my flat and I without saying anything super casually go to open the door. At this point, I was definitely expecting at least some push back, but surprisingly there was none. I lead her inside and pour us both a glass of wine. I could tell from her body language that she had become a little more nervous since coming inside. The best course of action is to let her get comfortable and not rush the escalation. I take her on my balcony, while her dog runs around terrorizing my place. I’m just secretly praying, he doesn’t take a big vengeful shit somewhere.

We are on my balcony for over an hour. After a two glasses of wine she starts loosening up, telling me a little bit about her crazy ex husband, who stalked her and did all kinds of fucked up shit. She also reveals that she has been hesitant to have sex with men, because she loves her freedom and doesn’t want to get attached. The wine is having a positive effect on me as well, I am much more chill and grounded. After 30 minutes of drinking and banter, I move to sit closer to her. Then a bit closer. Then i am right next to her. I start slowly escalating, brushing my hand past her hair and complimenting it. Putting my hand on her leg, few seconds at first, but longer and longer each time. She tells me she likes me and the conversation turns slightly more sexual. She tells me again how she misses sex, but is worried about becoming attached and loosing her freedom. This is good. It means half the battle is done and she is thinking about having sex with me.

The dog starts going crazy again and runs on the patio barking. I am a little paranoid that she would want to walk her dog, but fortunately she wanted it to happen just as much as I did and tells me she really hopes she doesn’t have to walk him. I start to notice that the dog starts barking every time I start escalating. If it’s a coincidence, then It was a very strange one. I make a joke out of this and use it as my “excuse” to escalate more, saying “kiss me now your dog isn’t looking”. It works quite well.

I go in for the kiss and she shyly kisses me back. No more then 30 seconds and I pull away. She has a smile on her face and we drink more wine. I pick her up and put her on my lap. I am escalating even more now. My hand rubbing her leg. Lightly kissing her back. Holding her by her hips. Letting her feel my erection as she sits on me.

After a bit, I can tell the sexual tension is palpable enough. Without saying anything, I take her hand and lead her to my bedroom. The dog ofcourse following us the whole way. I throw her on my bed and start making out with her & kissing her body. She starts moaning. I pull down her dress and start sucking on her big fake tits. She loves it and moans even louder. I take her hand and put it on my dick. Her eyes light up. She hurriedly rips my pants off, lifts her dress up, and shoves it in… before I even have time to put a condom on. Must be all that self imposed sexual deprivation

Normally, I rarely fuck girls without condoms, especially ones I just met. However, I could tell she was more of a “good girl” who probably hadn’t been with many guys in her life. Plus, it felt amazing. She was tiny, with gorgeous blue eyes, blonde hair, and a set of perky DD fake tits. The sex was awesome, not even the same realm as the Aussie Asian. I asked her if she was on the pill and she said yes. After, a few minutes of staring down into her gorgeous blue eyes, I came deep inside of her. Super hot!

We go get coffee afterwards, the dog now completely going berserk from not getting attention for 2-3 hours. I have her text me a picture she had on her phone, which I thought was particularly cute. I definitely would’ve have loved to see her again. Besides being hot and an amazing fuck, she was also super sweet and fun to be around (qualities almost non-existent in LA). Unfortunately, as you can see from the post-sex texts, she winds up unexpectedly going back to her home town less then two days later.. so I didn’t get a chance to see her again. Maybe, one day… 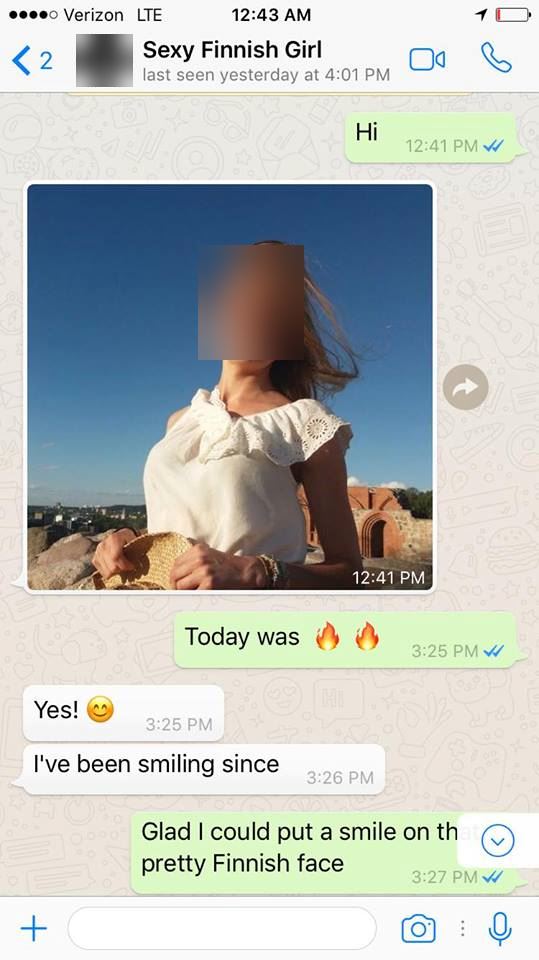 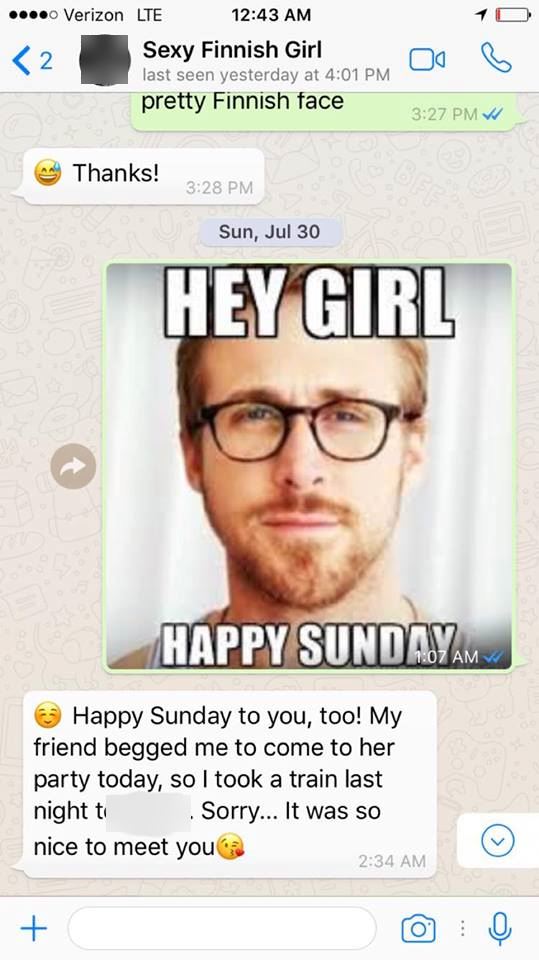