I couldn’t end my stories, from Poland without sharing my encounter with the batshit craziest, most paranoid, racist woman I ever met.  This took place a few hours before The Nerdy Polish Blonde and was one of the weirdest experiences I ever had. This girl was truly batshit crazy…in the worst way possible. 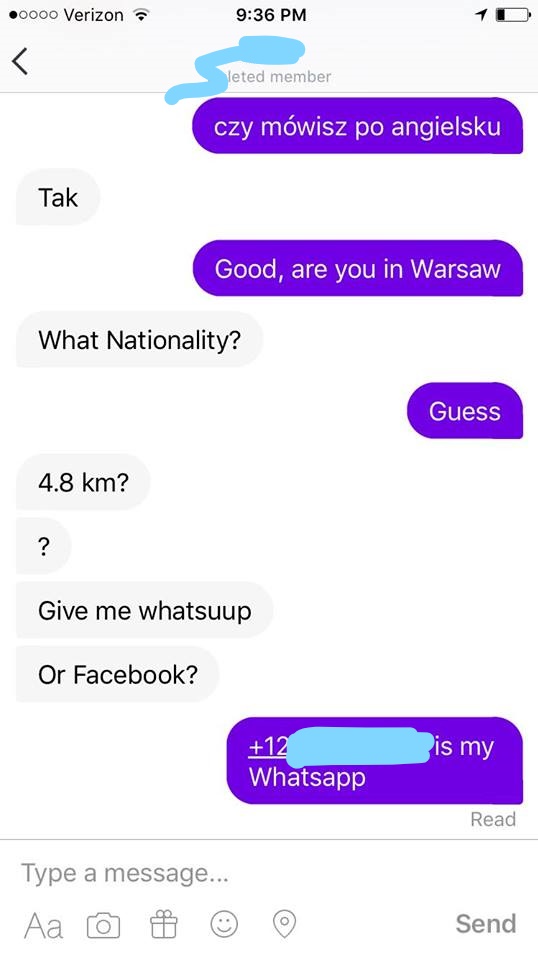 We matched on Badoo (quite popular in Poland) and I opened her with “Do you Speak English” written in Polish. She responds “Yes” and I go into my usual rapport building. However, she completely ignores my question and asks me about my nationality. This will make sense later. I tell her to guess and she completely changes topics demanding my “whatsuup” or Facebook. I give her my number 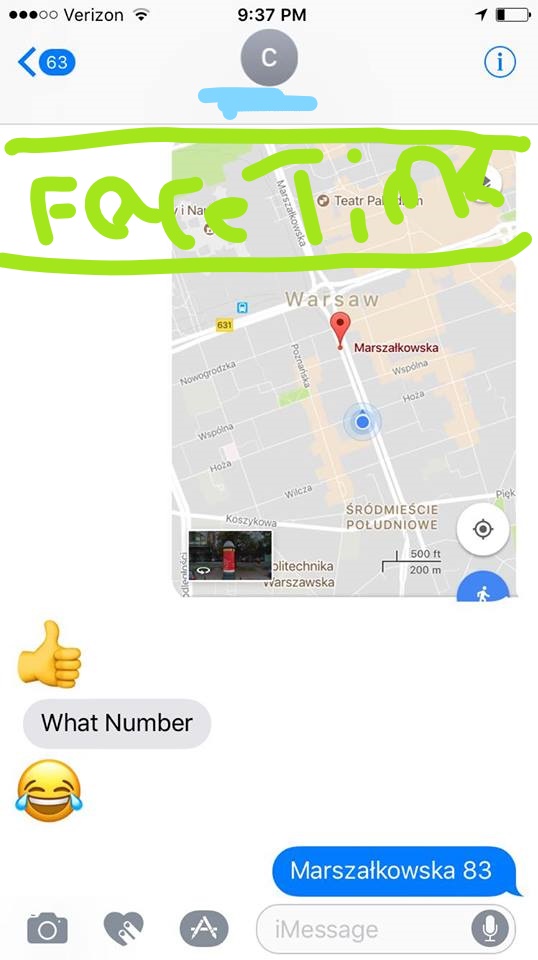 Within 30 seconds of giving her my number, I get a face-time call from her. I pick it up and there she is on the other hand. I’m impressed she is quite sexy. A solid 8. However, it’s not long before that fades. She seems super paranoid and grills me on my ethnicity. Asking me numerous times if I am sure I am an American. Then she proceeds to ask me a barrage of other random non-sensical questions. Her English is pretty bad, which adds to the mind-fuck. She tells me numerous times she is looking for someone serious and she is not sure if I am a “serious boy” or a “not serious boy”. I cant make this shit up. I am very grounded and eventually convince her to come over and join me for a glass of wine.  The whole facetime session lasts around 15 minutes. She ultimately agrees and I tell her I’ll send my address over. 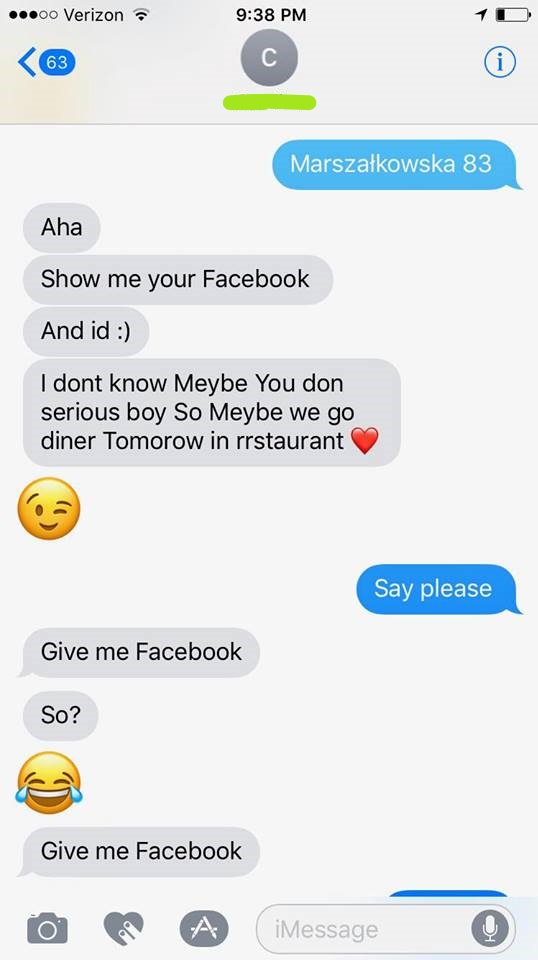 Here the paranoia and rudeness start to come out. We just facetimed and she still wants to see my facebook and apparently my ID. In case you are wondering why, she for some reason thought I was lying about being an American visiting Poland (cause how often does that happen). I tell her to say please and she responds with more demands and insisting I give her my facebook. 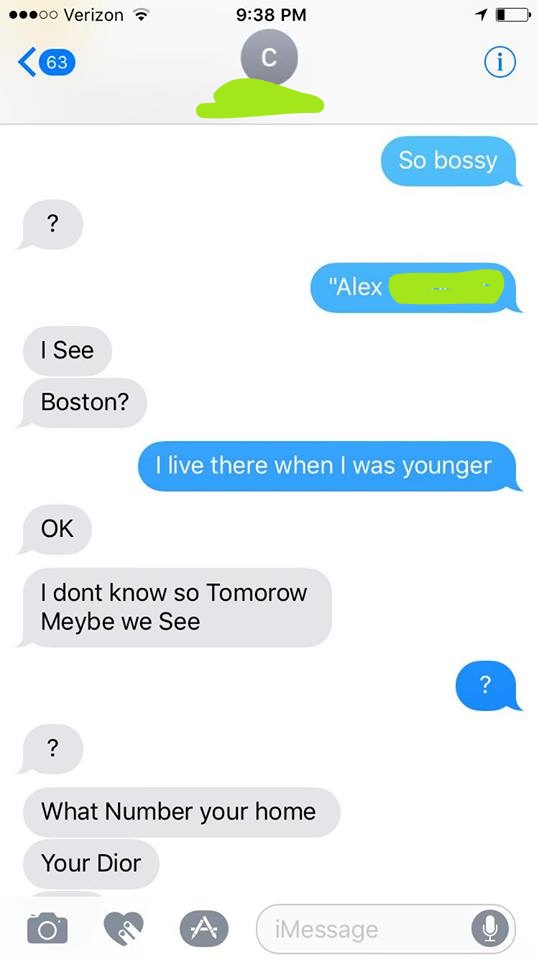 I call out her behavior and she doesn’t seem to understand….basic decency and manners can be terribly confusing when you are a giant bitch. I decide to just give her my facebook since that is looking like the only way I will get her over. She questing me on one of the cities I have as my location. Then she changes her mind telling me we might hang out tomorrow, before changing her mind in the next text and asking for my address again 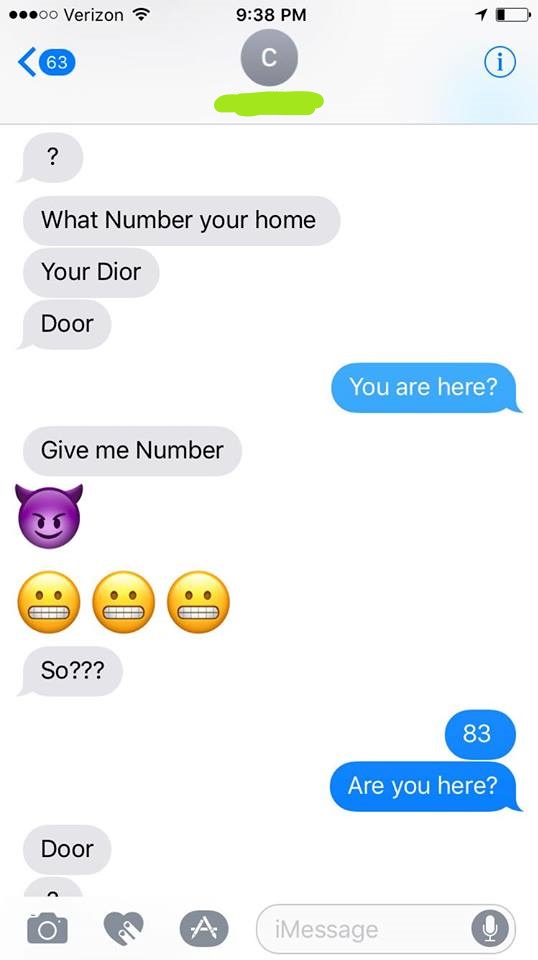 She is blowing up my phone asking for my “home number”. It is not clear to me if she is outside or not (she lived pretty close) or what she is trying to accomplish. I am staying in a big apartment complex where I have to go out and greet people at the front so obviously I would just give my address and come out to meet everyone when they were outside. However, after a few exchanges, it becomes clear that she is demanding my actual apartment number 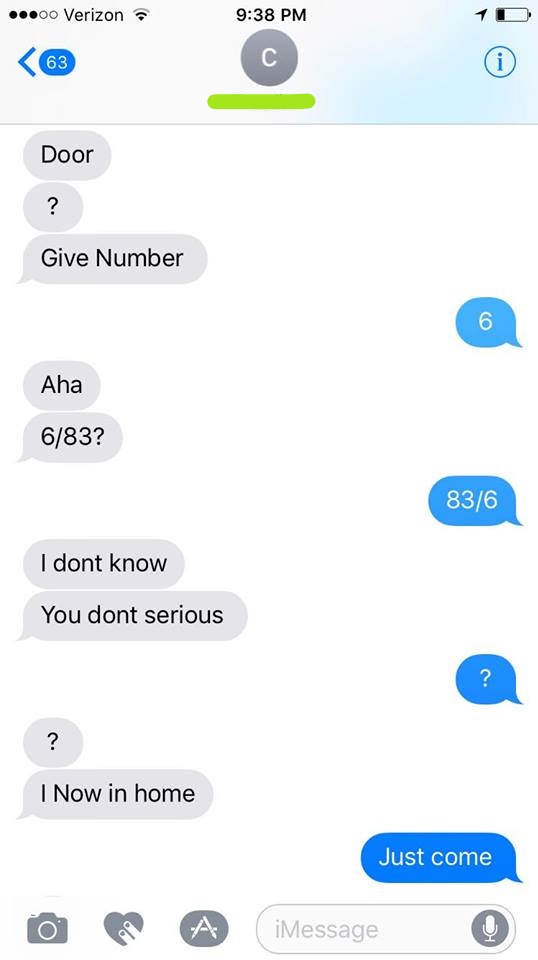 I finally realize what she is talking about and give her my door number. From her texts, I can almost imagine her feeling like sherlock Holmes solving a mystery. She again accuses me of the same grave offense…” you don’t serious”. 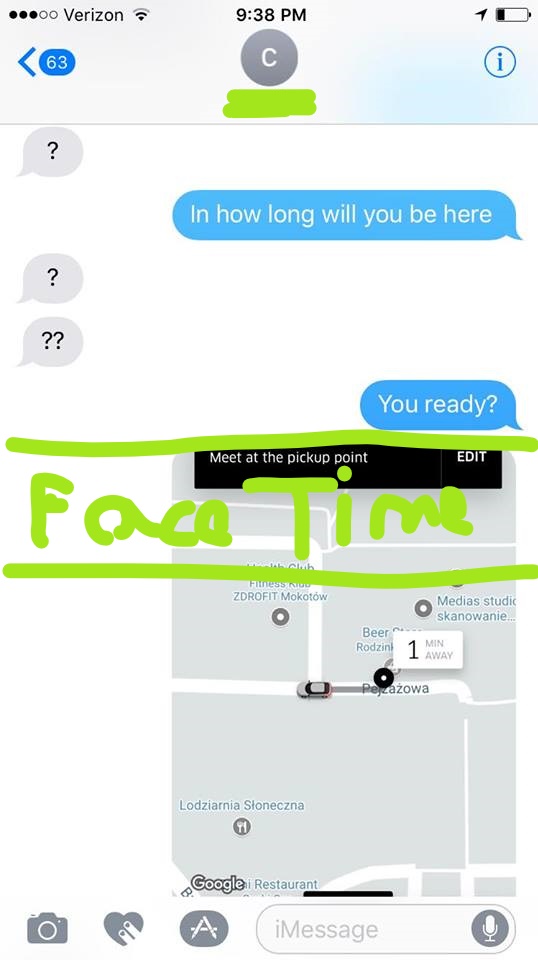 Here she face times me again. She tells me she is not sure if i am “serious boy” and that she doesn’t know if she should come over. I talk to her for a few minutes and tell her that if she wants to see me, she should come today and that we will just drink some wine & chat. She finally agrees but asks me if I can get her an uber. It is only like $2 or $3 in Poland so I agree. 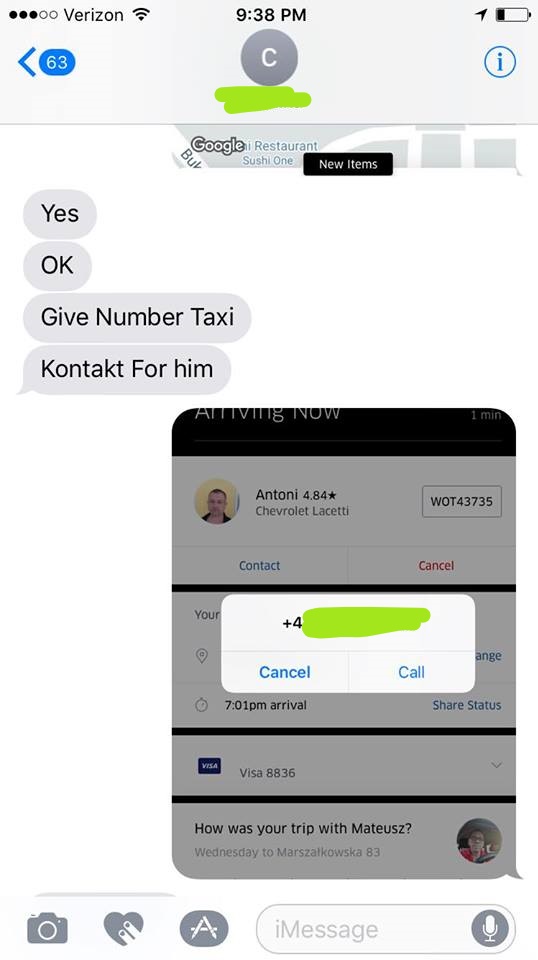 I text her a screenshot of the ubers eta and she asks me to give her the drivers contact number. Again slightly unusual, but I send it over 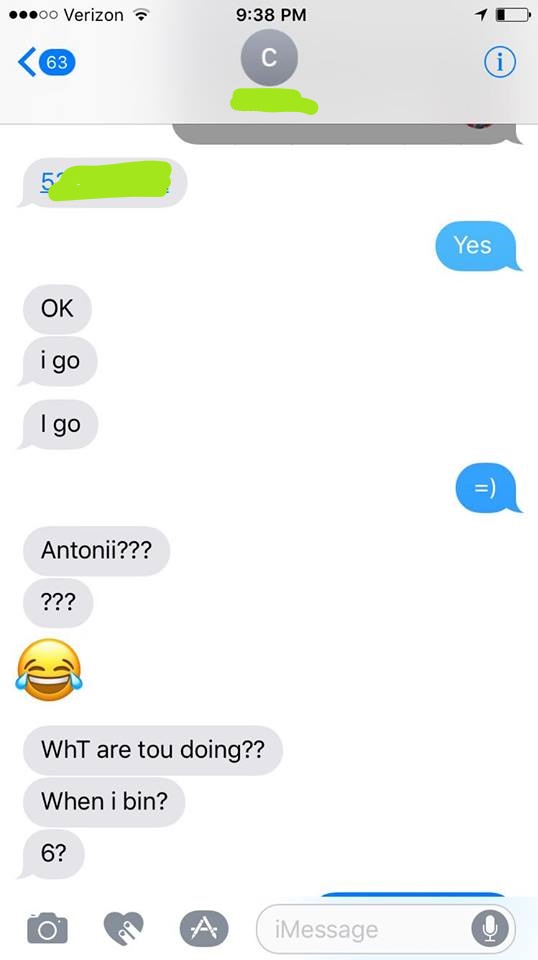 She tells me that she is in the uber and then starts blowing up my phone with a barrage of nonsensical messages. As you can see her grammar is very on point 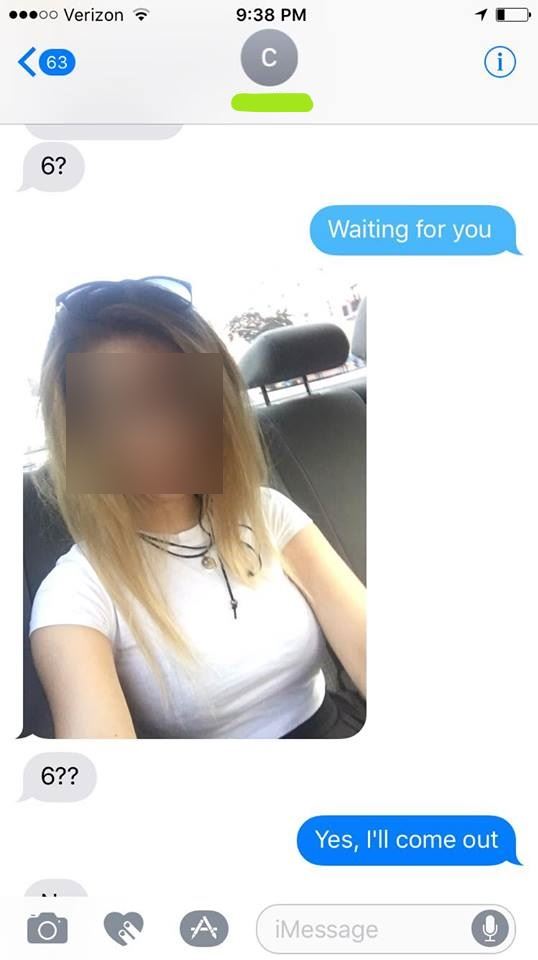 She is texting me about the apartment number repeatedly even though I gave it to her already. I can’t tell if she is actually here or not so I text her that Ill come out (my building is confusing) 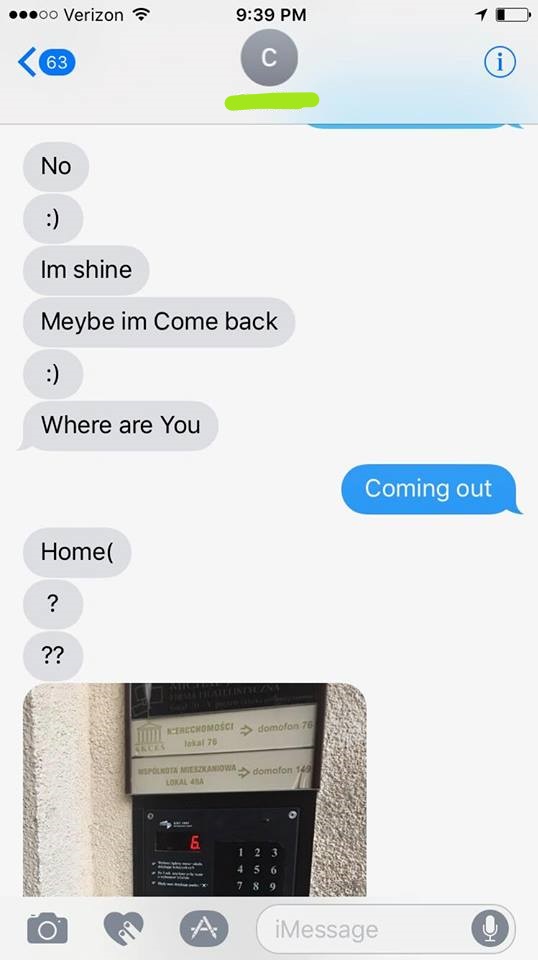 She tells me she is not here yet. Then a few minutes later I get a barrage of texts in a row telling me she is here, asking me where I am. I respond right away telling her that I am coming out 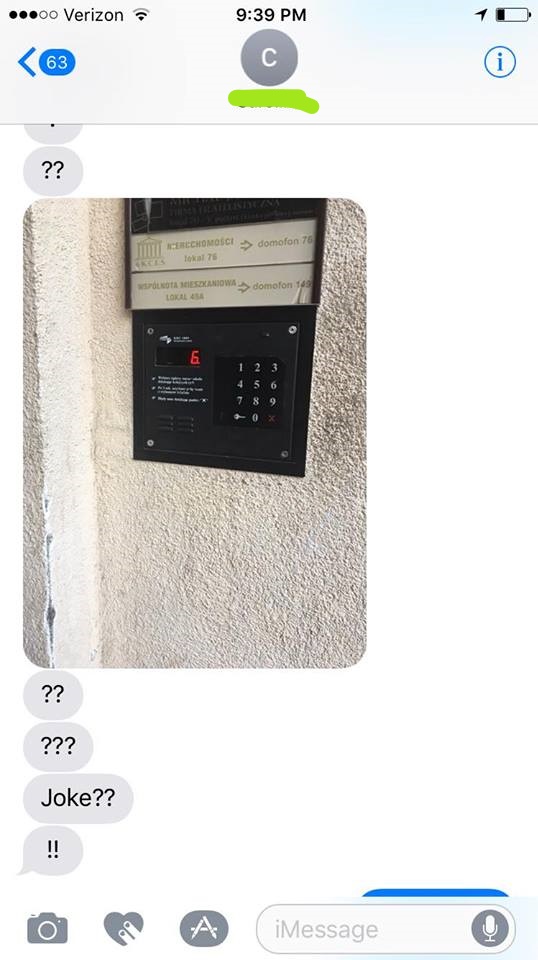 As I am walking out, she sends me a picture of the entry access screen to my building (very common in Poland) asking me if this is some kind of a joke. I have no idea what she is talking about and proceed to go get her 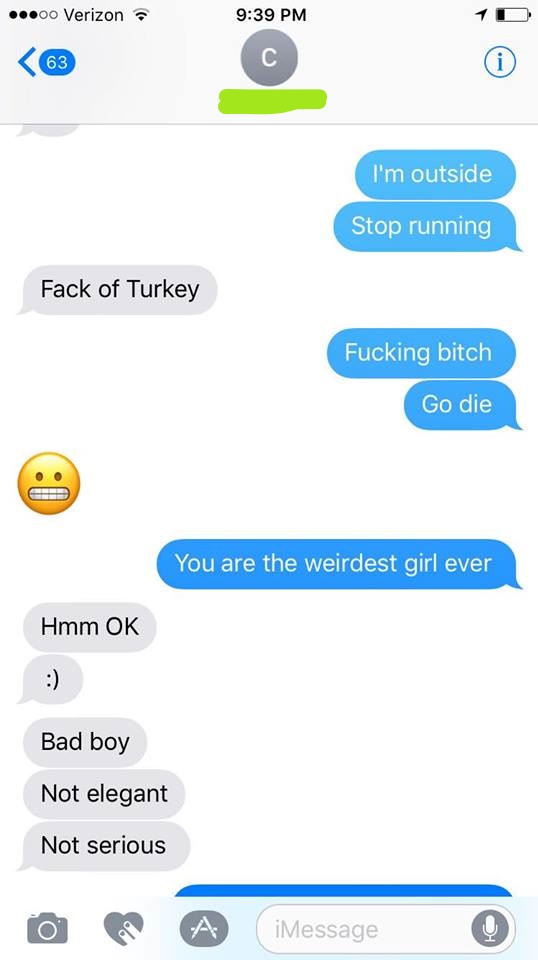 From the time she sends me the first text saying that she is outside, to the time it takes me to actually get outside is literally one maybe two minutes max. However, during that extremely brief window, she managed to go into full-on paranoia mode and lose her shit. As I walk to my gate, I don’t see her. I look to the side and she is already half a block away speed walking down the street. I call out her name. She sees me, turns around and just starts running the other way. I am so confused by this and instinctively start speed walking after her. She runs a few blocks and stops at the train station. After a few minutes, I catch up to her as she is sitting on the bench.

I am still super chill at this point and look at her and calmly ask her whats up. She is super paranoid and says she doesn’t know me & that I have her confused with someone else. I know 100% its her and keep asking her what the problem is. Eventually, she calms down a bit and tells me she got worried because I wasn’t there and thought it might be some “bad person doing something bad”. I explain that I started walking downstairs the minute that she texted me and ask her why she took off down the street when she saw me. Her explanation is almost too absurd for words. She tells me that she saw me wearing a black shirt and thought because of that I was Turkish and not American

I calmly explain to her that Its a regular shirt and that I am indeed American. She says she doesn’t believe me and thinks I am lying. Then she demands to see my id. I show her my id and she stares at it forensically for several minutes. Finally, she looks a little calmer. Then she proceeds to take a picture of me on her phone. I ask her why and she says “in case you kill me”. This girl is beyond paranoid, especially since I am super relaxed & laid back. Next, she proceeds to call some girl on her phone and starts frantically chatting in polish. I can tell she is talking about me and I am slowly starting to get annoyed. Not only is this girl batshit crazy, but she is also extremely rude and demanding.

After a few minutes, I semi-calmly tell her she is being rude and ask her to hang up the phone. It takes a few reminders, but she finally does. We chat a bit more and she seems significantly less paranoid. I ask her to come have a drink with me and she agrees. We start walking back to my apartment. Along the way, I proceed to make extremely normal small talk. Typically with these types of situations, you at first have to do most of the talking. In one of my comments, I casually mention that I speak Russian. She stops dead in her tracks, paranoia kicking into full gear again.

She starts grilling me on why I speak Russian and then proceeds to accuse me a dozen times of lying to her about being American. This is rapidly starting to get very annoying. I do my best to calmly explain that I was born in Belarus, but have lived all my life in America. It takes a few minutes of this, but she eventually calms down a bit. In my explanation. I tell her that I travel a lot and it is not unusual for Americans to visit Poland. She asks me where else I have traveled and I tell her that six months ago I was in Colombia. This again makes her freak out. She tells me that she doesn’t believe me and she doesn’t think I have traveled anywhere and that I am lying

This is the most fucking paranoid suspicious girl ever. I show her my facebook and point out to the status where it says that I am in Colombia. She proceeds then to call her friend again and I can tell they are talking about me. At this point, my annoyance is starting to reach a boiling point. This girl has been horribly rude from the start, accusing me of lying about every single thing I said (I didnt lie once in case you are wondering) and is now for the second time having a phone conversation in front of me while I have been super patient and nice. It is just too much. I tell her to stop being rude and get off the phone. She tells me that she might go have a drink with her friend because “I am not a serious boy”, but that she might come back afterward if I want to have dinner with her.

I am super patient and……just kidding. I temporarily completely lose my cool. It is not common for me to yell or scream, even when annoyed, but this chick was just too much. I told her that she was a crazy bitch and that she can go fuck her self. She just turned around and ran off, as dozens of confused polish people looked on. I then went back to my apartment and angrily Tindered for an hour. It wasn’t the extreme paranoia and craziness, so much as the rudeness. This chick literally was a giant bitch from the start. That tossed in with the craziness & paranoia made her the perfect cocktail of shitty company.