This article will cover the 7 important rules of texting any girl that you like. When you’re texting a HB (hot bitch), someone you really like, it can be easy to fuck up. Whether it’s a new match on Tinder or a girl you met at a bar, there are certain key rules to follow.

But, say you match with/meet a girl who’s your type. A type you rarely meet and whenever you picture your ideal girl, everything about this girl points towards that. You’ve barely known her and you’re already picturing getting married to her and having 2 kids with a dog and a cat.

Hold your horses! Don’t let emotions dictate your rationale. When you get overly excited, you’re much more prone to make silly mistakes. Especially when you have a million thoughts running through your head about what you should be doing.

Well, your luck is about to change. I’m going to go through the 7 rules I follow when I match/number close a chick I’d definitely see myself dating and not be embarrassed to take out to dinners and what not!

I’m going to go through each of the rules with a good, bad example so you guys can get an idea of what the nuances can be 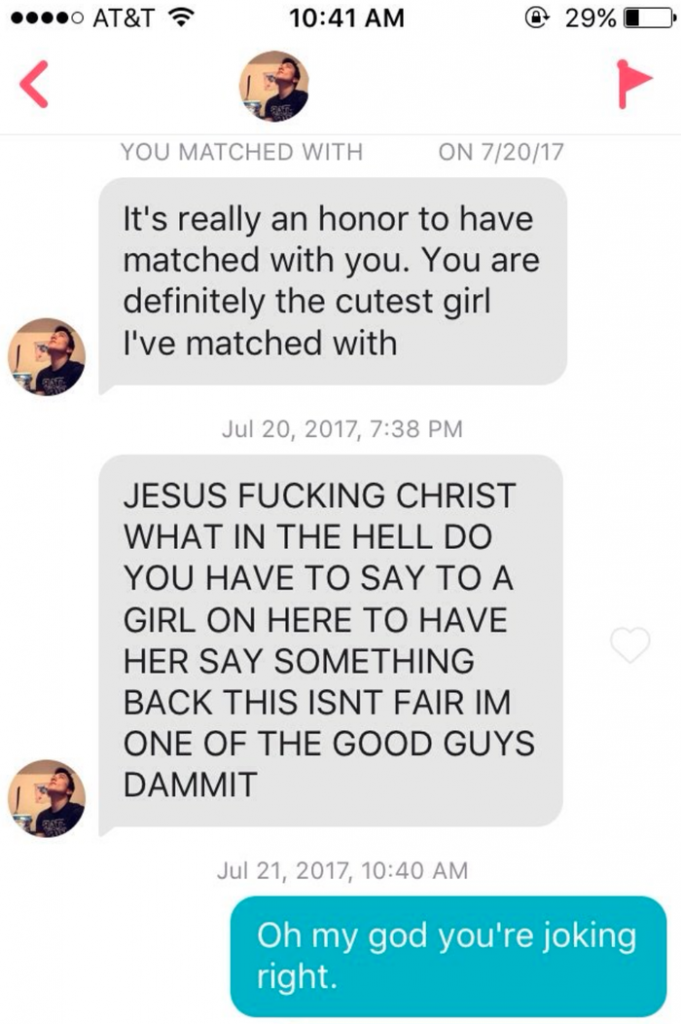 Instantly puts her on a pedestal calling her the prettiest girl he’s ever matched with. This plummets his value before the conversation even has a chance to get started. You can feel his frustration in the second text. Commonly, “nice guys” will treat a girl like she’s above them & then get butthurt/angry when it doesn’t work out.

Even though this girl is his type, he plays it cool. He uses the “We” frame, flirts, qualifies her, and gets her invested in the conversation. He doesn’t get needy, or put her on a pedestal which results in the lay. 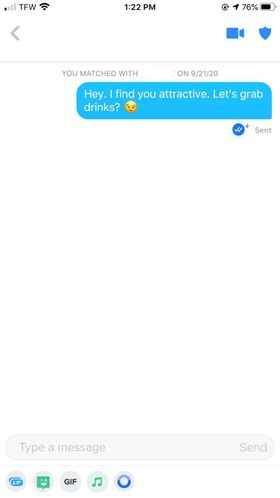 Doesn’t seem that bad. But by the looks of it, he probably sends it to every girl. OR he is so easily sold, he is ready to have drinks. The girl has nothing to go with when it comes to his personality. So, she most probably won’t follow through with the plans 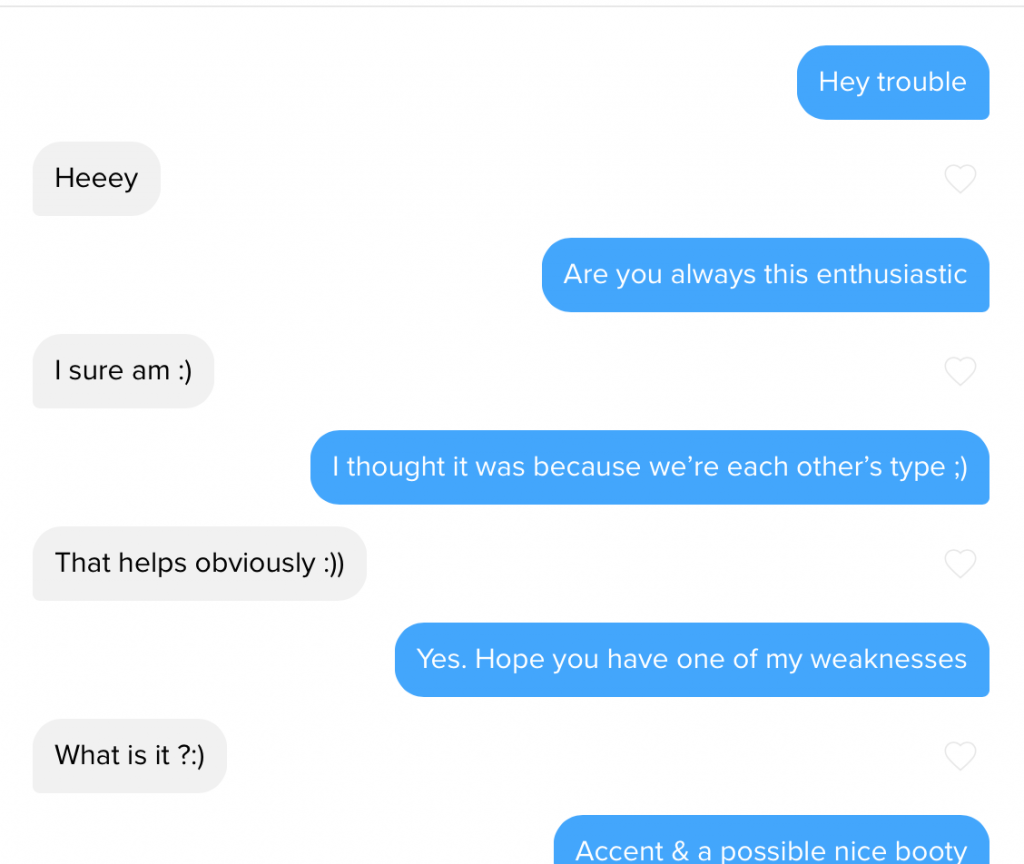 He keeps it simple and to the point. Showing intent, without overdoing it. The underlying frame is that he sees potential but he’s not “sold” yet

Big contrast to the previous example. Lots of pussy footing & beating around the bush. The guy seems like he’s very afraid to offend her or take any kind of social risk, which of course is going to hurt his chances.

This is a bit of an extreme example, but you can see how just going for it and not being afraid to sexualize can really pay off. 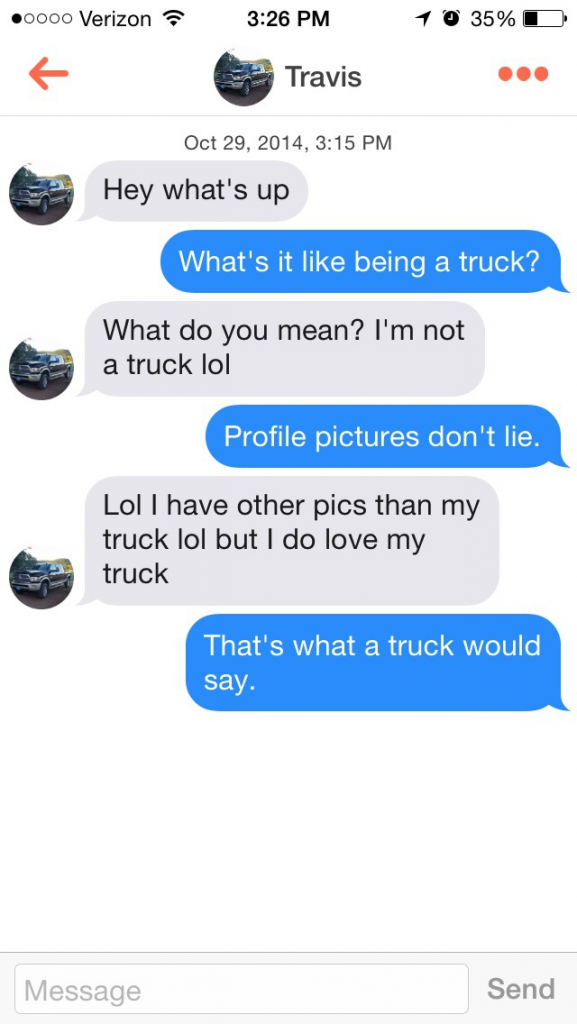 Too gamey even though funny. Guys have become too focused on what would be a witty thing to say, meanwhile just by keeping it simple, you can stand out with ease 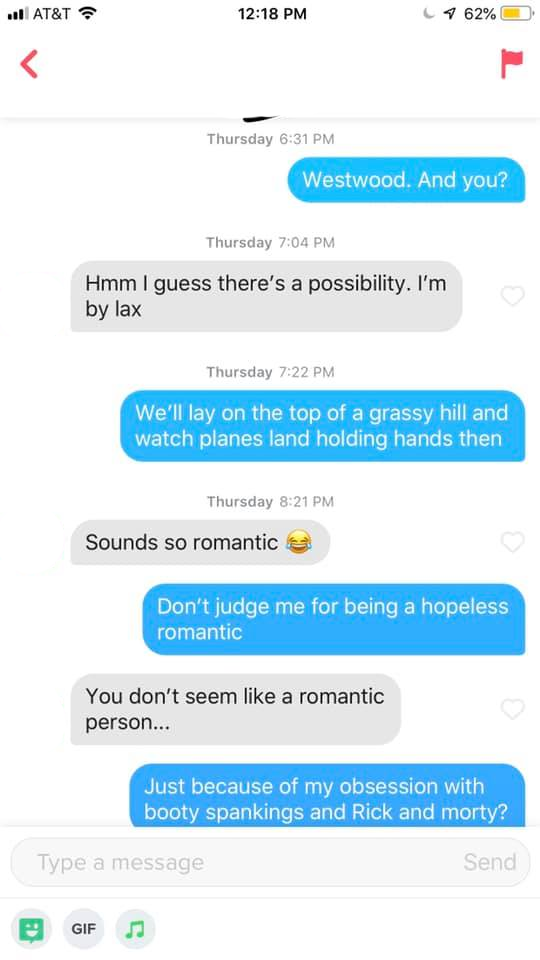 GOOD: He isn’t afraid to show his corny side and his nerdy side. It’s original and unique. She will be intrigued by it

As you can see, this conversation and logical question asking back and forth is not going to go anywhere. This could easily be a conversation between someone and their shrink. He was a bit too scared to show intent. Instead of asking what she was pondering about, he could have playfully interpreted “You were pondering how to flirt with your favorite New Delhi guy?”. The conversation just goes on as if they want to give updates to each other on their daily’s

He lets her know what his intentions are. Almost as if it’s the way he treats any girl. And when she denied being into someone direct like him, he kept pushing for it to convince her. Eventually, she falls into the frame since she likes a man who holds his ground. Every woman does

Obviously some top-notch text game. Just kidding, for the love of God don’t be this guy. His neediness is pathetic and will turn off every single girl in the world, including 90-year-old ladies in nursing homes. The ironic part is that this girl wasn’t ignoring him, she was just driving home and didn’t see her phone. Had he not been so needy & blown up her phone, then he might’ve gotten a second or third date, instead of being mercilessly mocked by everyone on the internet.

Persistent without being needy. He doesn’t double text every 5 minutes but his texts are drawn out over a few days. Learn to be like that and always think how you can be abundant

This is the exact opposite of having standards. He lets her know that he is free like all the time. Being overtly available communicates that you don’t have a lot to do in your life and also communicates that he isn’t going to be picky about who he spends his time with. Of course, she flakes on him since she is turned off by “I’m like free all the time” and “Hopefully you like me”

He shows standards as soon as she calls herself “A hot nerd”. He emphasizes that he goes for intellect and not just looks. And for her to win over, she needs to check off his checklist and that there needs to be chemistry

All of these seem very doable and very obvious at first but to be able to implement it takes some practice and being fearless about failure.

Let me breakdown an LR which follows the rules I specified 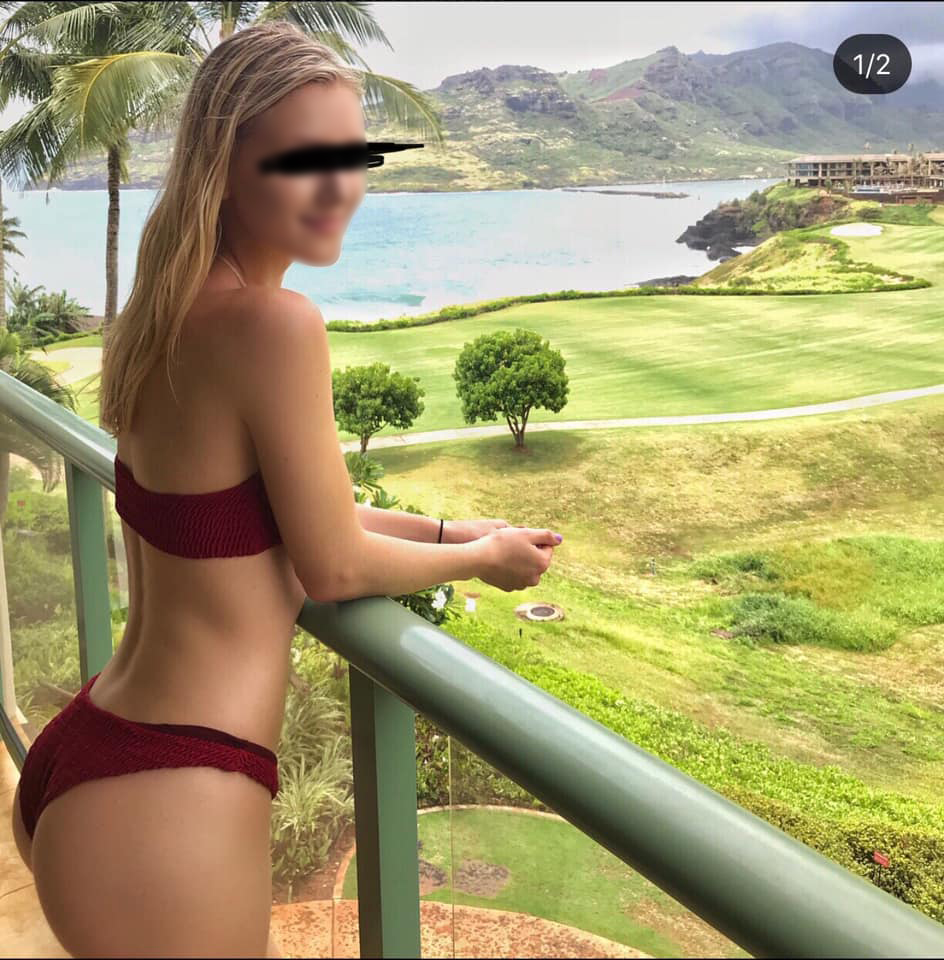 1) As you can see, the girl is a solid HB and any guy in the world would be jumping with joy if he matched with her. As described in Point 1, he treats her like any other match

2) “Sex writer” is part of his bio and she opens him with that. Even higher compliance and she’s extremely hot, but still, he isn’t overly impressed as mentioned in Point 2

3) He actually doesn’t answer her question. So, she has no option but to switch the topic. He says his favorite place is Greece and the reason being people there are open-minded and adventurous SHOWING STANDARDS as Point 7 suggests

4) He shows intent by letting her know that they’d be going there for their honeymoon as a roleplay. She bites. He describes a romantic date of them vibing together and including handcuffs. Shows that he isn’t a pussy (Point 3) and is direct (Point 5) about his intentions

5) “Fortune favors the brave”. Riffing off of her “lucky me”. He shows that he’s not afraid to be himself (Point 4) and that he’ll say the first thing that comes to his mind.

6) Shows intent by being direct and asks her about her BJ skills (Point 5). She bites hard. He meets her that night and he bangs her with ease.

7) As you can see, even when she said “Can I let you know in 30 minutes”, he didn’t panic and try to push harder. He just sent an “Ok” and let her make the decision to meet. He gives her space in a NON-NEEDY way as mentioned in Point 6.

As you can see, talking to women and meeting them up can be as simple as you make it. Just because the girl is hotter than usual, you do not treat her differently. It actually works counter-intuitively since she will be able to sense that you usually aren’t in the company of such hot women

As you get better with texting and meeting women in real life, the more options you will have. The stronger the foundations for 7 these rules will be ingrained in your head and personality. And it will show. Trust in the process and yourself that this is something easily achievable

Indian “until next time” PE.