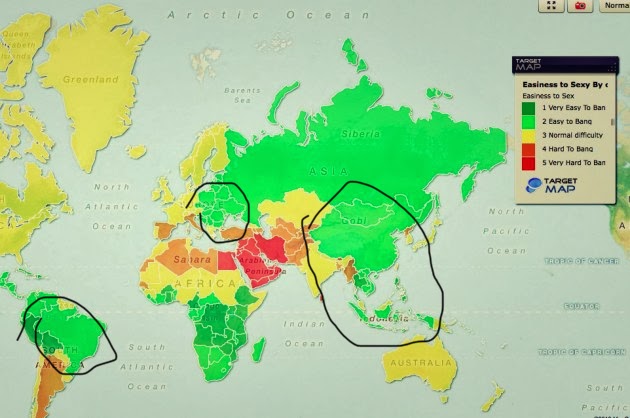 What is the Best Place in the World to Meet Girls and have Lots of Sex?

Contrary to what some coaches say, pickup is absolutely NOT the same everywhere. In some countries, it’s easy to get laid. I’ve been to quite a few where I can easily bang 3 girls a day. In other countries, banging 3 girls a week is extremely difficult. A lot of this is determined by the sexual marketplace of a particular city. I have written about this topic extensively in the past, but basically, these are things like make to female ratio, level of competition, level of demand for “your type”, etc. Bottom line: there may not be one single easiest place to get laid in the world, but there are a number of places that are easier than others.

In this article, I am going to go off both my experience and what I’ve heard from friends & clients. And while I have traveled more than most people, I have not experienced nearly enough of the world for this to be a “definitive” evaluation. Let’s just call this article a starting point that I plan on expanding in the coming years. For the sake of simplicity, I’m going to break it up into four areas (America, Eastern Europe, South America, and Southeast Asia). And now, I present to you the list of the easiest countries to get laid in the world.

1) THE UNITED STATES – If you live in Europe you might think America is heaven for game. Unfortunately, it’s not true. America on average is more or less on par with certain Western European Countries (England & Germany) and is overall much more difficult than everything else I’m going to mention. This is due to a variety of reasons like generally a high level of competition, feminism, flake culture, etc.

That is not to say that America “sucks”. This is where I learned game. And 80% of my lays were in America (I’ve spent most of my life here). Also, U.S cities are NOT the same. Some are a lot better than others. People typically think that the “glamorous” cities are the best, like Los Angeles or Vegas. But, in reality, the opposite is generally true. One, of the best cities in the U.S for getting laid, is fucking Pittsburgh (according to multiple sources) Another great one is Albuquerque (can verify with personal experience).

If you’re from outside of America, you’ve likely never even heard of these places. That’s because they are the opposite of glamorous. People rarely go there. And most people who are born there and become successful get the fuck out. And that’s, what makes them great for game. This lack of solid competition and a favorable male to female ratio makes you much more of a hot commodity there. Also, there is a lot less flaking and sugar daddy culture in these places

So generally, In America, the “low key” cities are much better for pickup. However, there are a few exceptions. The big one is New York. The male to female ratio is very good there and this combined with the extreme population density, gives you A LOT of options. Possibly, even better is Boston. This is due to the insane amount of universities in that city. If you like white girls, then Boston is gonna be your jam.

2) EASTERN EUROPE – Overall, a great place for game. A lower level of competition then the U.S. Also, the girls themselves on average are superior. More feminine & honest … and MUCH less flaky. During all my travels to Eastern Europe, I’ve only been flaked on maybe two or three times.

I’ve only experienced a relatively small part of Eastern Europe, but out of those I found Poland to be near the top. Yes, at bars & clubs polish girls can be pretty bitchy. However, online is so good in Poland that you never even have to leave your house to get laid. I could easily tinder a new girl over every single night. Or two. I’ve been to Warsaw and it was insanely easy to get laid. I’ve never been to Krakow, but I heard it’s even easier

Another city that’s worth a shoutout is Prague. I don’t get nearly as many tinder matches there as I do in Poland, but the amount I get is still way more than the U.S…Also, this may be a coincidence but the two nights that I went out in Prague both resulted in me pulling & banging one of the first few girls that I talked to.

Budapest & Helsinki are also worth an honorable mention. Finish girls, in general, are VERY DTFand have much fewer hang-ups about sex than girls in most other countries. Other places that I haven’t been to, but heard good things about are: Croatia, Serbia, and Austria. Those three are definitely on my list.

But, what I’ve experienced has been insane. During my last trip to Medellin, I was turning down 7s and 8s because I couldn’t keep up. Near the end, there were some nights where I was relieved when I got flaked on. Overall, the girls in Colombia are Hot, feminine, passionate, and love to fuck. They also on average put in much more of an effort than their American counterparts.

4) SOUTHEAST ASIA – Disclaimer, I haven’t been to S.E Asia yet, but I do know numerous people who I trust to give an honest assessment. And the verdict is…insane amounts of pussy. Your tinder will explode with fobby Asian girls who want some American dick.

Most countries most people think of when they hear S.E Asia is Thailand. And yes, it’s supposed to be what it’s cracked out to be. But, even easier countries for game are Indonesia and the Philippines. It’s supposed to be pure insanity there in terms of pussy. I’ve heard stories of guys doubling their lifetime lay count there in a few weeks

The one negative I have heard there is that a noticeable percentage of girls there don’t shave their Pussy. Some guys might not give a shit at all, but for me, it’s a turn-off. In South America pubic hair doesn’t exist for 7+ girls

CONCLUSION – There is of course much more to travel than just pussy. It’s an experience you’ll never forget that also makes you grow as a person and allows you to meet people you normally never would. But my philosophy is that the world is so big, I might as well combine all that with some big tittys in my face.

If you guys have traveled to any country that you thought was great for game, share in the comments below. I want to hear your opinions as well